I was asked to draw the Google Doodle to commemorate the legendary writer, Saadat Hasan Manto’s 108th birthday on May 11, 2020. Manto is a hero to me, so this was a huge honor!

Thank you to AD Angelica McKinley who was such an amazing person to work with. You can read more about Manto and the doodle here. 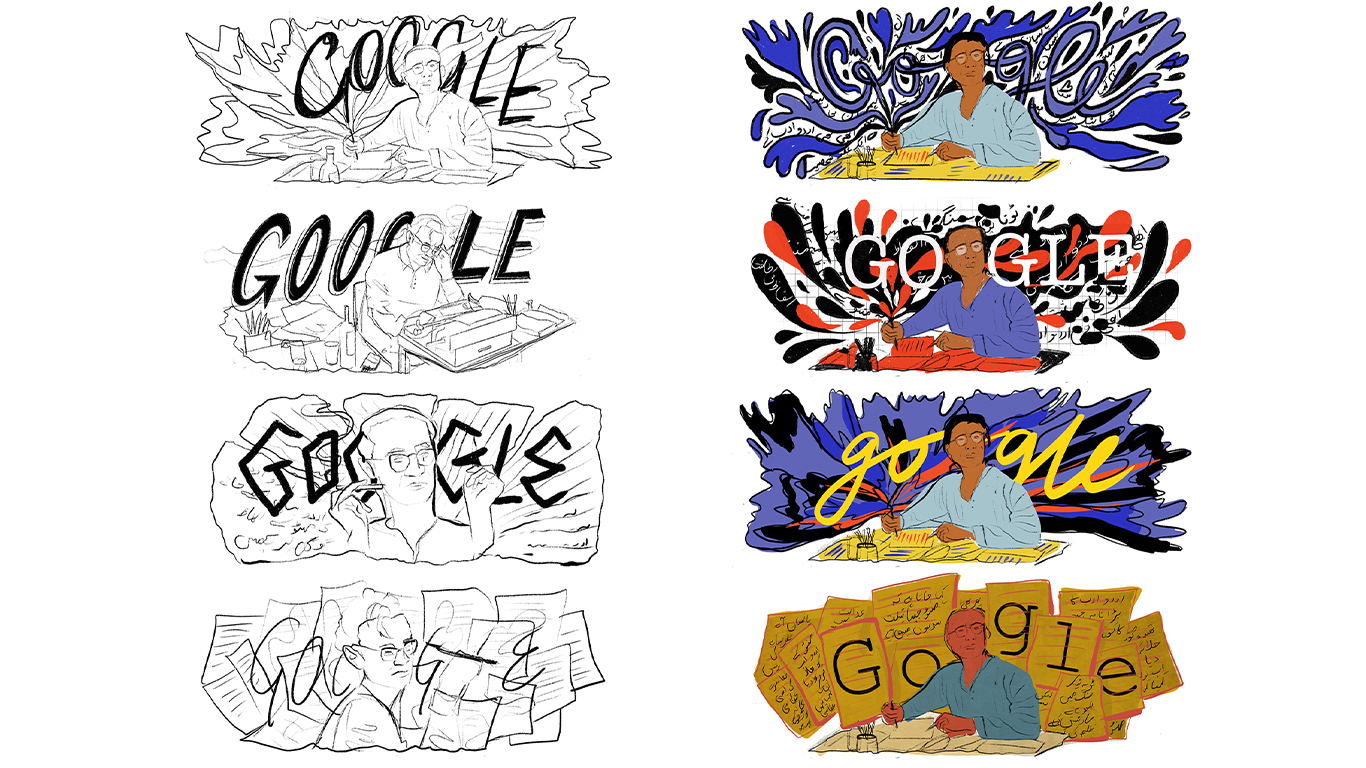 Rough sketches for the Google Doodle

“Manto was already an established writer before August 1947, but the stories he would go on to write about partition would come to cement his reputation. Manto produced 20 collections of short stories, five collections of radio dramas, three of essays, two of sketches, one novel and a clutch of film scripts. He wrote about sex and desire, alcoholics and prostitutes, and he was charged with obscenity six times. In his journalism, he predicted the rise of Islamic fundamentalism in Pakistan. But it is for his stories of partition that he is best remembered: as the greatest chronicler of this most savage episode in the region’s history. The historian Ayesha Jalal, (who is Manto’s grand-niece) wrote in her book about him, The Pity of Partition: “Whether he was writing about prostitutes, pimps or criminals, Manto wanted to impress upon his readers that these disreputable people were also human, much more than those who cloaked their failings in a thick veil of hypocrisy.” 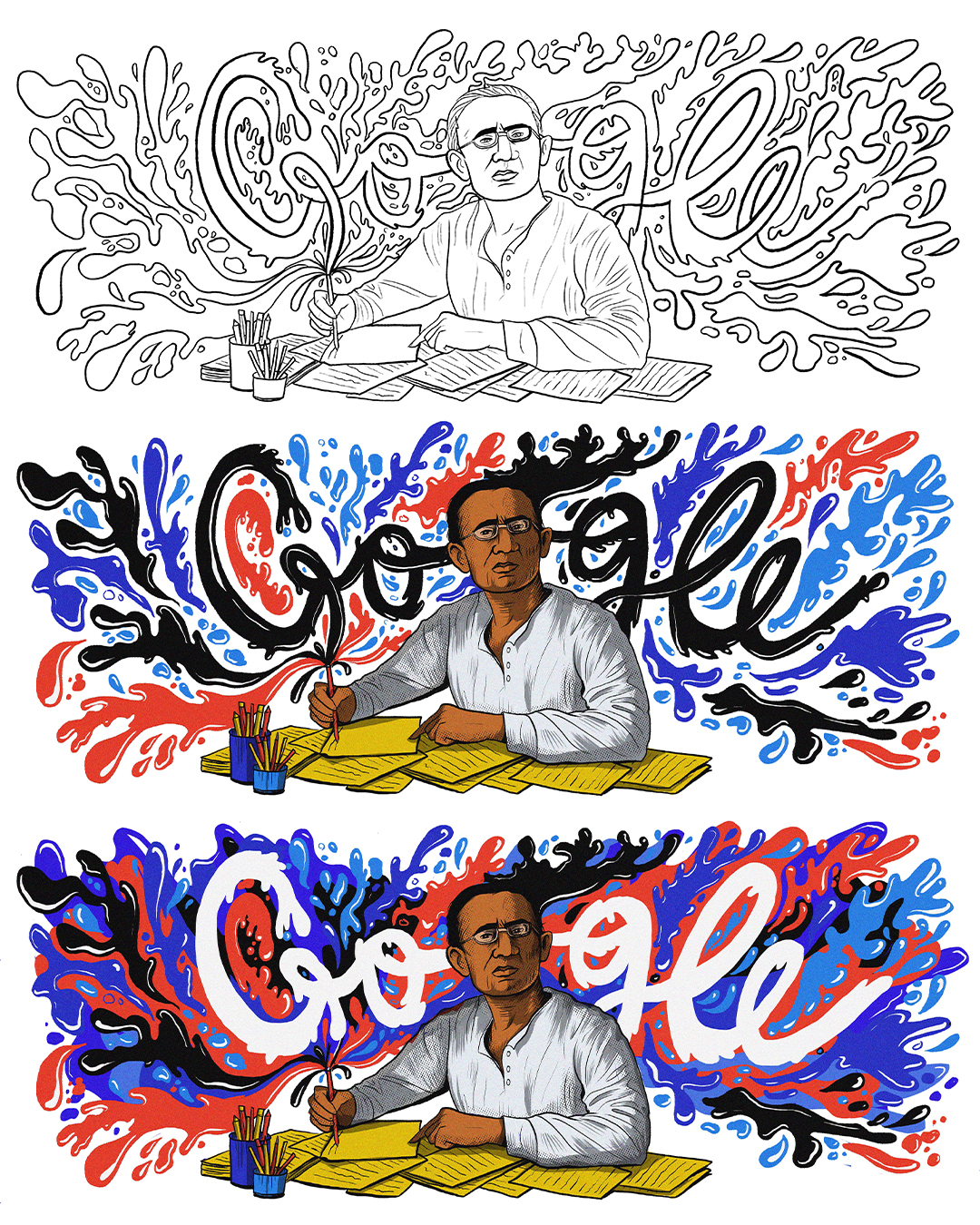 Refining lines for Manto’s Google Doodle- trying to get the splashes in the background to represent both ink and the power in his words.

“I wish I had known about Manto when I was growing up in the UK. The picture of Pakistan I was fed was of a place of conformity and religiosity, where you did not question or mock. It feels both astonishing and inspiring that such a modern writer was alive at the very birth of Pakistan. Manto makes us rethink what we imagine Pakistan to be, and has been treated warily by the state. “He has been celebrated in academia and the arts circle but on a national level there has been if not a shame then a discomfort,” says the actor and film-maker Sarmad Khoosat who directed and starred in the recent Pakistani film. “When I was at high school he wasn’t part of our syllabus,” recalls Mohammad Hanif. “The people who read his books were considered rebels, edgy people who didn’t conform. Reading Manto gave me the idea that you can write about stuff that is happening right now.”
In the early 50s Manto wrote a number of essays entitled “Letters to Uncle Sam” which are distressingly prophetic on the direction that Pakistan was to take. In another essay, “By the Grace of Allah”, he predicted a future where everything – music and art, literature and poetry – would be censored. “He anticipated where Pakistan would go, but I think he would be quite horrified with some of the trends that have occurred,” writes Jalal. “He would have been a blistering critic of all that has happened in Pakistan in the past 35 years.” 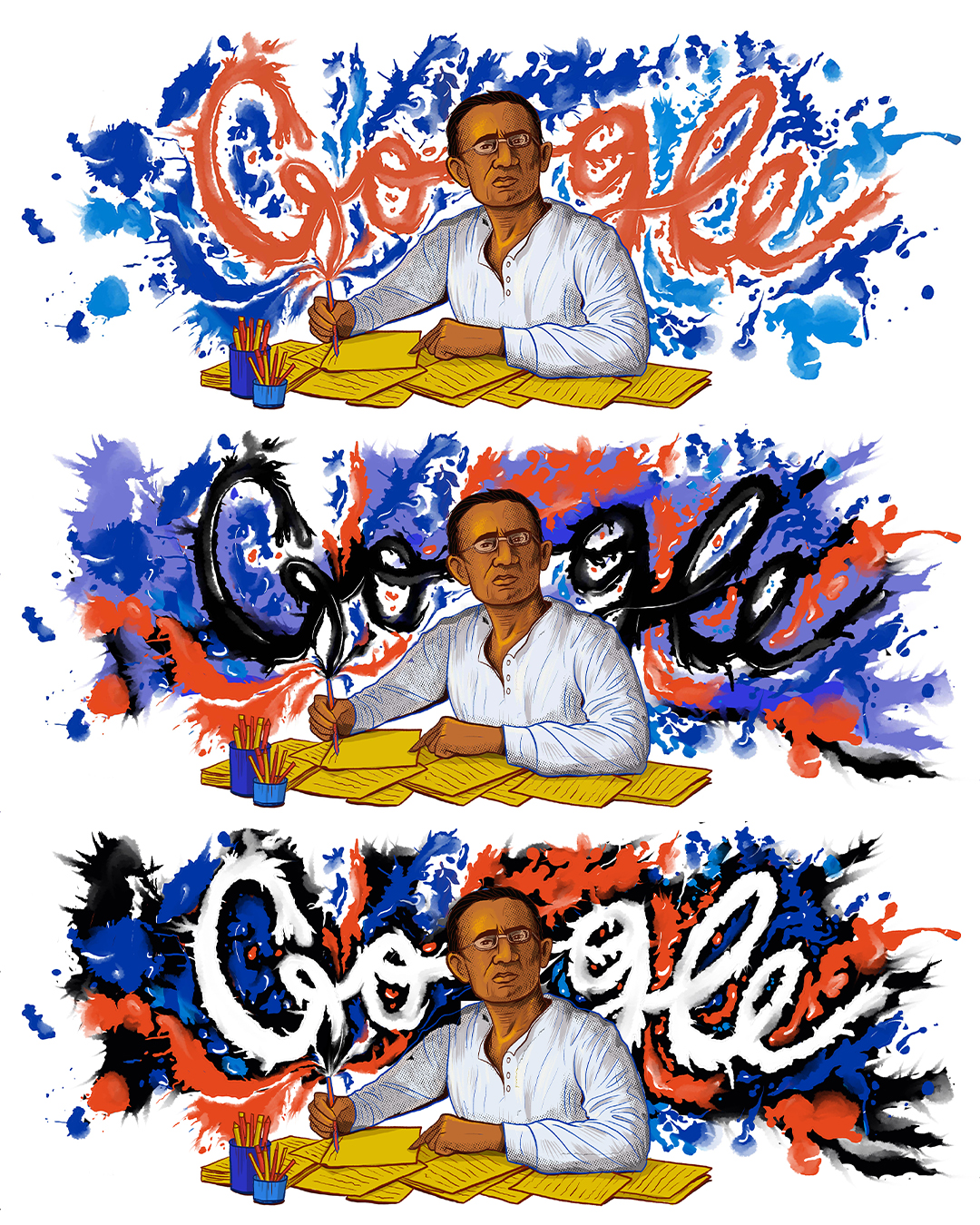 Final round for Manto’s Google Doodle, reworking how inks bleeds and spreads to represent Manto’s ideas.

“The irony is that even though Manto foresaw the Pakistan that exists today it would now be harder for a writer like him to work than it was 70 years ago. “Times are tougher than they were in his time and we are now more intolerant as a nation,” says his daughter Nusrat. In the last year progressives, bookshop owners and journalists have been murdered by religious extremists.
In the absence of a new Manto the old one is finding new respect and a new audience. “His writing has aged phenomenally well,” says Hanif. “I read him 40 years ago and I meet kids who are reading Manto for the first time – you can actually see the light in their eyes. You can see their jaws dropping and they say, ‘What is this? Who is this guy?’” It is a question that deserves to be asked beyond India and Pakistan. “Manto is as skilled as the best short story writers of the Russian and western tradition” says Tanuja ‘and it is very sad that he has been erased from the literary canon.”

Quotes from The Guardian article, “Saadat Hasan Manto: ‘He anticipated where Pakistan would go’ by Sarfraz Manzoor.