The Aurat March (Women’s March) began in 2018 and is now held annually on Women’s Day to raise awareness for women’s rights in Pakistan.

The dire state of women’s rights and the ubiquity of gender-based violence in Pakistan makes gender inequality an everyday reality for all women. According to the Global Gender Gap Index, Pakistan currently ranks the second lowest in the world for gender equality. Among the seven South Asian countries included in the index, Pakistan is at the very bottom.

In 2020, the march grew bigger. The movement and its aesthetics mark an unprecedented moment for a society as conservative and afraid of women’s bodies as Pakistan. What sets this march apart as compared to historic precedents for the struggle for women’s rights in Pakistan is the accessibility and language used by the movement. It uses art, humor and colloquial language to make the personal political. Through witty and fearless slogans and placards held by marchers, it does the unthinkable by poking fun at the patriarchy. But while the march grows in popularity, so does its opposition. Despite the threats and vitriol, the women volunteers, activists and organizers soldier on. These women inspire me and I am honored to draw for a cause so close to my heart. 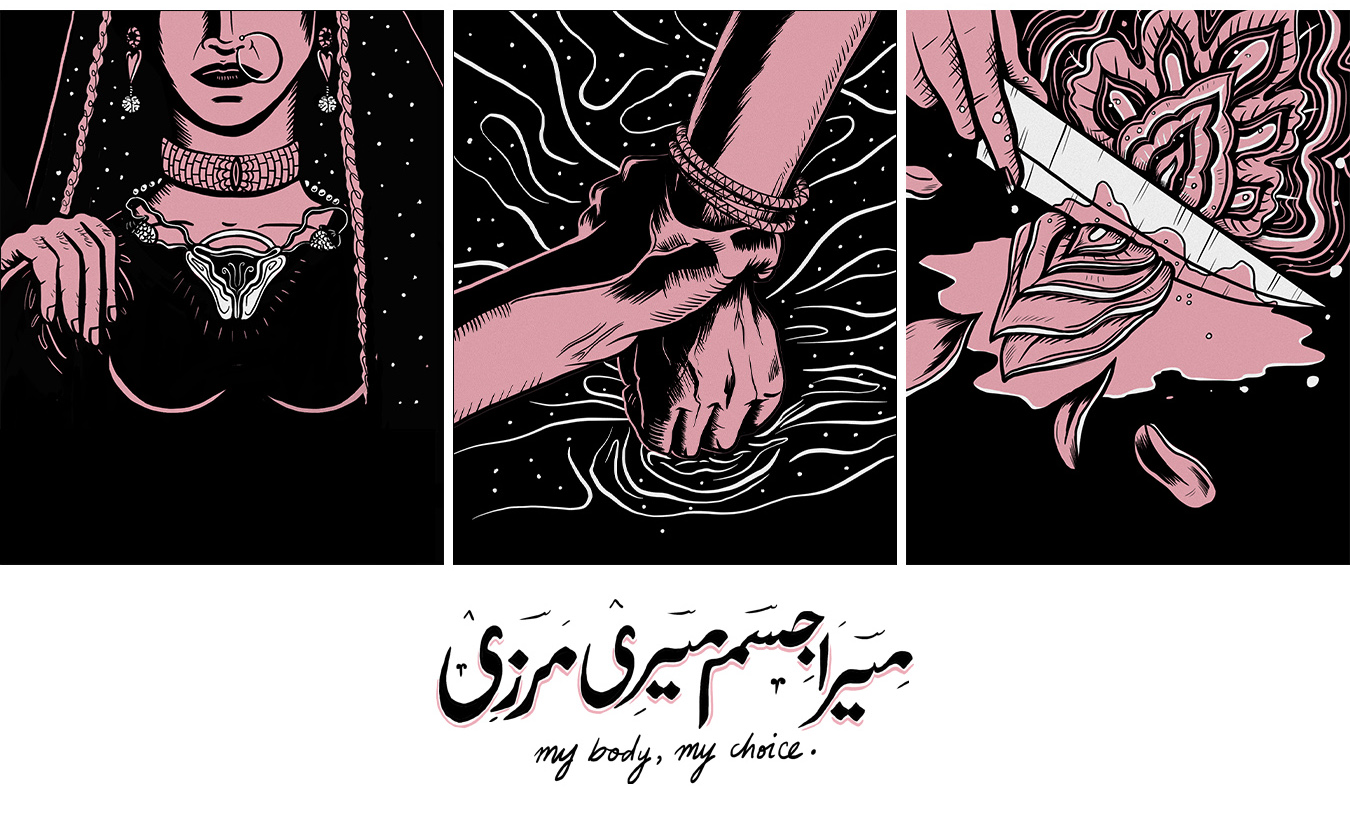 Since the first Aurat March, many activists have written to me saying they hadn’t considered how art could changes minds. “My Body my Choice” was one of the most controversial slogans raised in 2019, and I made a series of artworks to explain the ideas around body autonomy. The series talked about personal stories about the high mortality rate for women, rape and FGM. Aurat March has cemented my belief in the power of art to foster empathy and critical thinking. And in this case, tackle taboo subjects and talk about the full humanity of women. 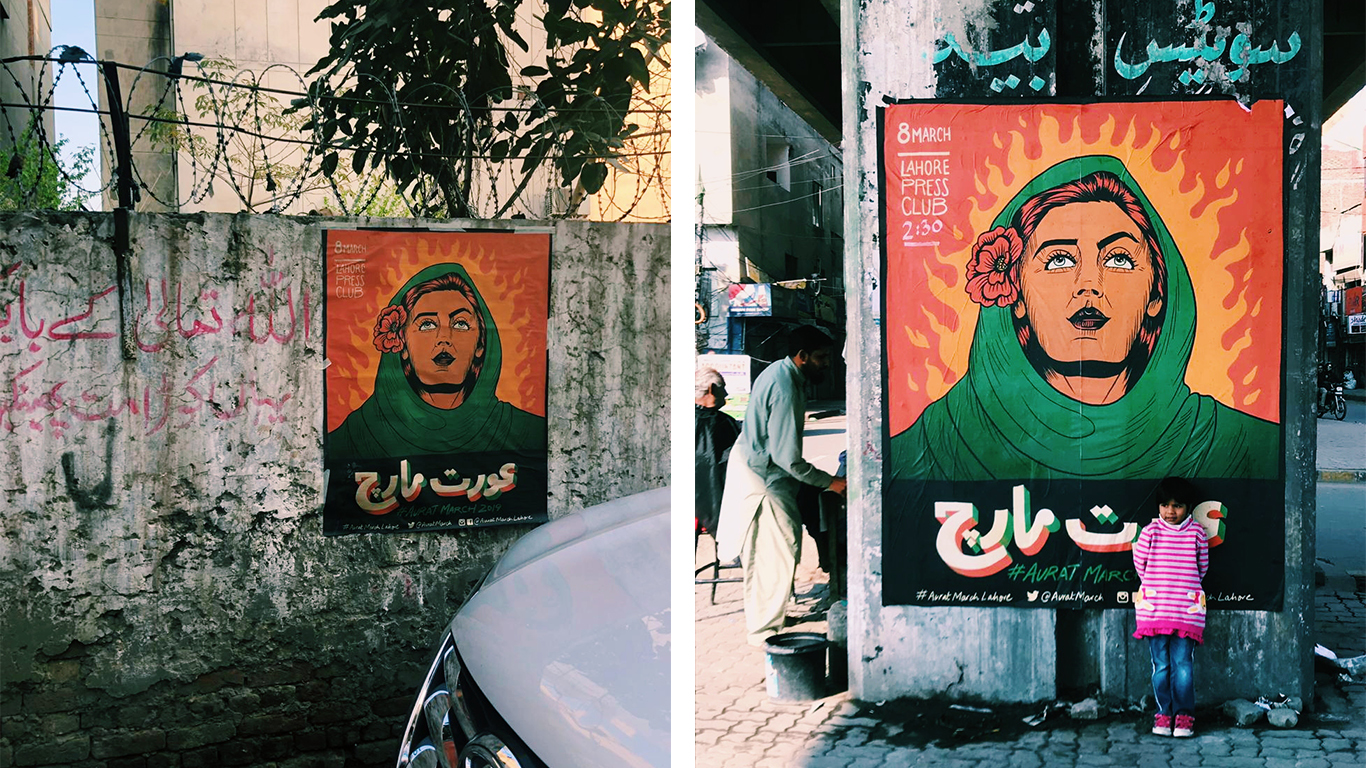 The posters for the Aurat March spread across cities. Women and girls downloaded the artwork off the internet and spread the word by talking to people and pasting flyers at schools and universities, bus stops, offices and in streets around the country. 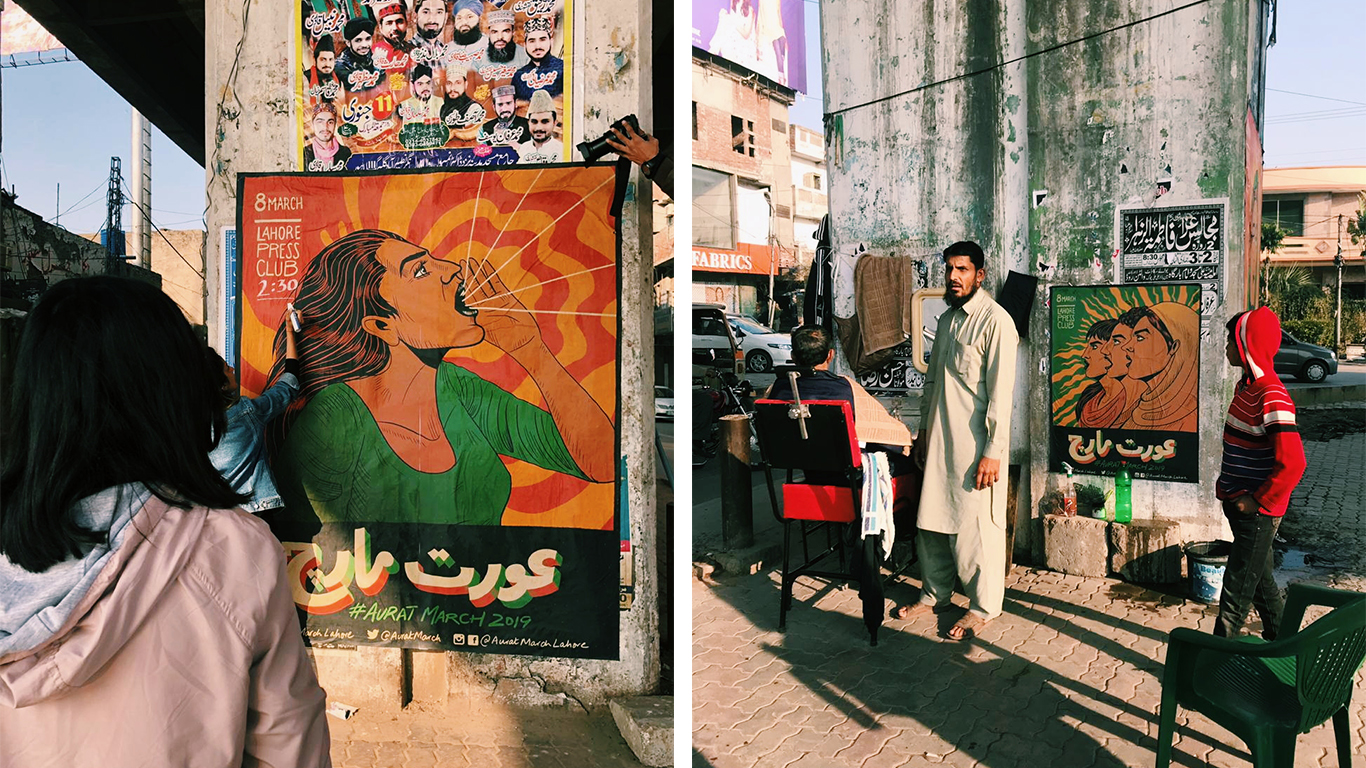 After the Aurat March, organizers began receiving threats; men were targeting posters and the women holding them by stalking their online profiles. But the backlash has only strengthened the resolve to challenge our patriarchal ideas about women. 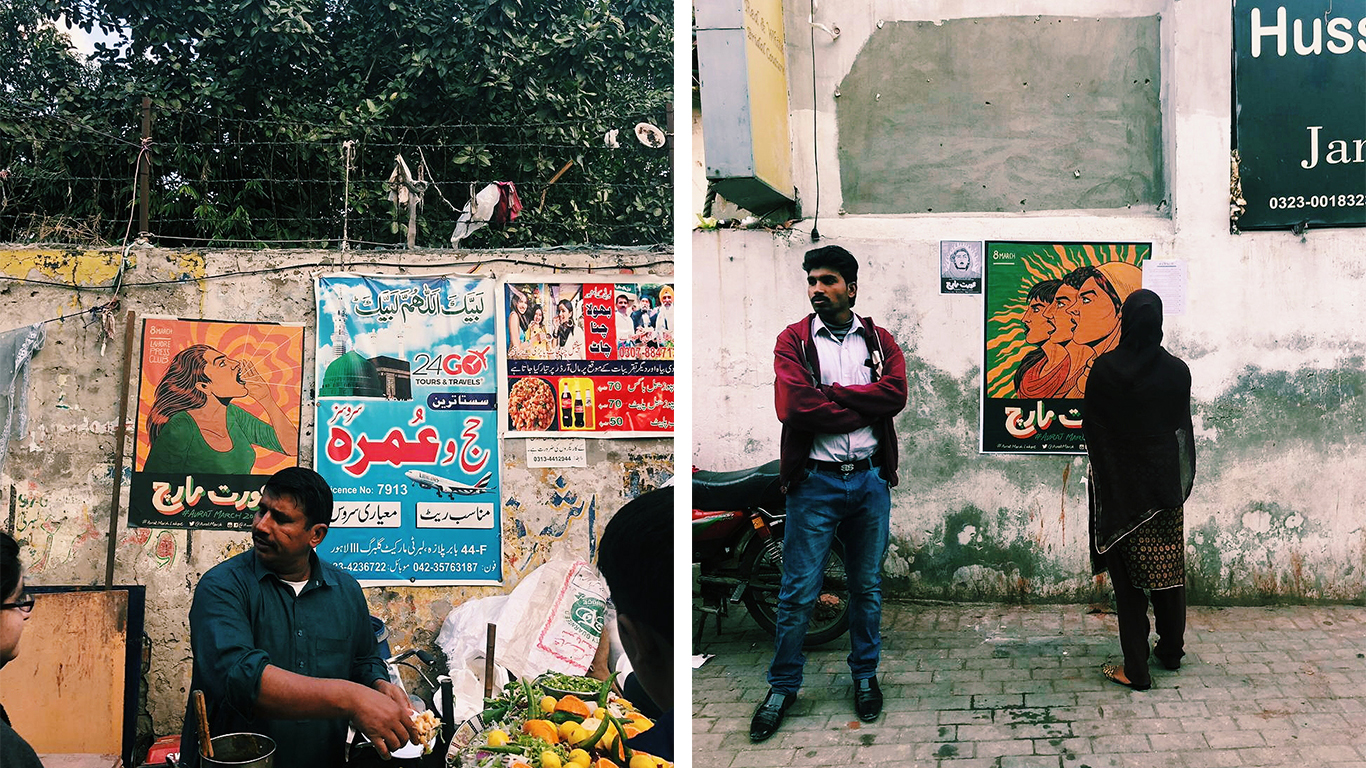 In 2019, AJ+ did a feature on my work and followed us as we pasted Aurat March posters in Lahore. It was humbling to see how far the news of Aurat March had spread.

That year, the Aurat March posters also made their way to Oslo Freedom Forum to talk about women in public spaces in a stunningly different context.

Posters were animated by the talented Ingo Raschka and the display was made possible by Sevim Abaza and Audrey Collette. 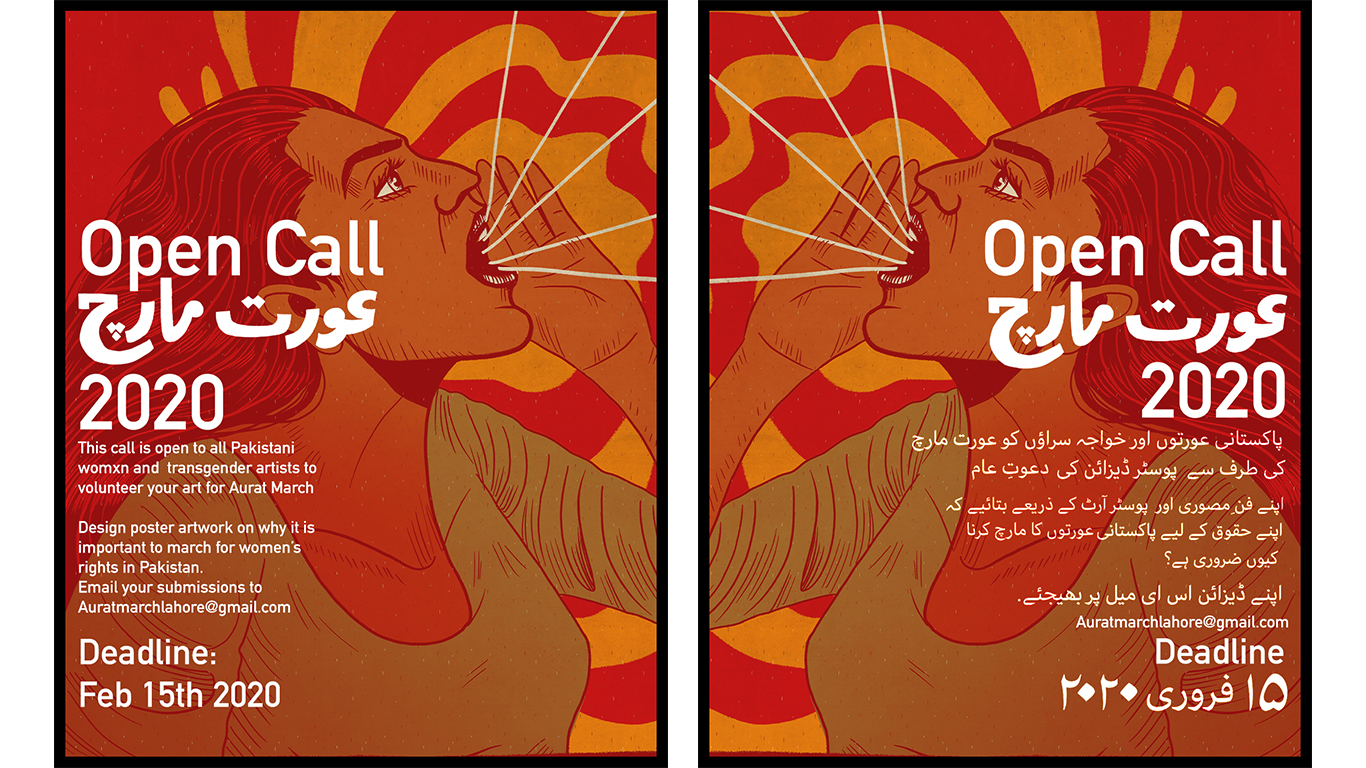 To make Aurat March 2020 reach more women and communities, an open call was held for poster designs. With a special focus on reaching out to rural or peri-urban communities, the call was open to all womxn and transgender artists, of any age, from across Pakistan to volunteer their art and voice.

The march is meant to be an open space of civic engagement and this open call was a way for the movement to be a collective effort. The open call was talked about in a news report here. 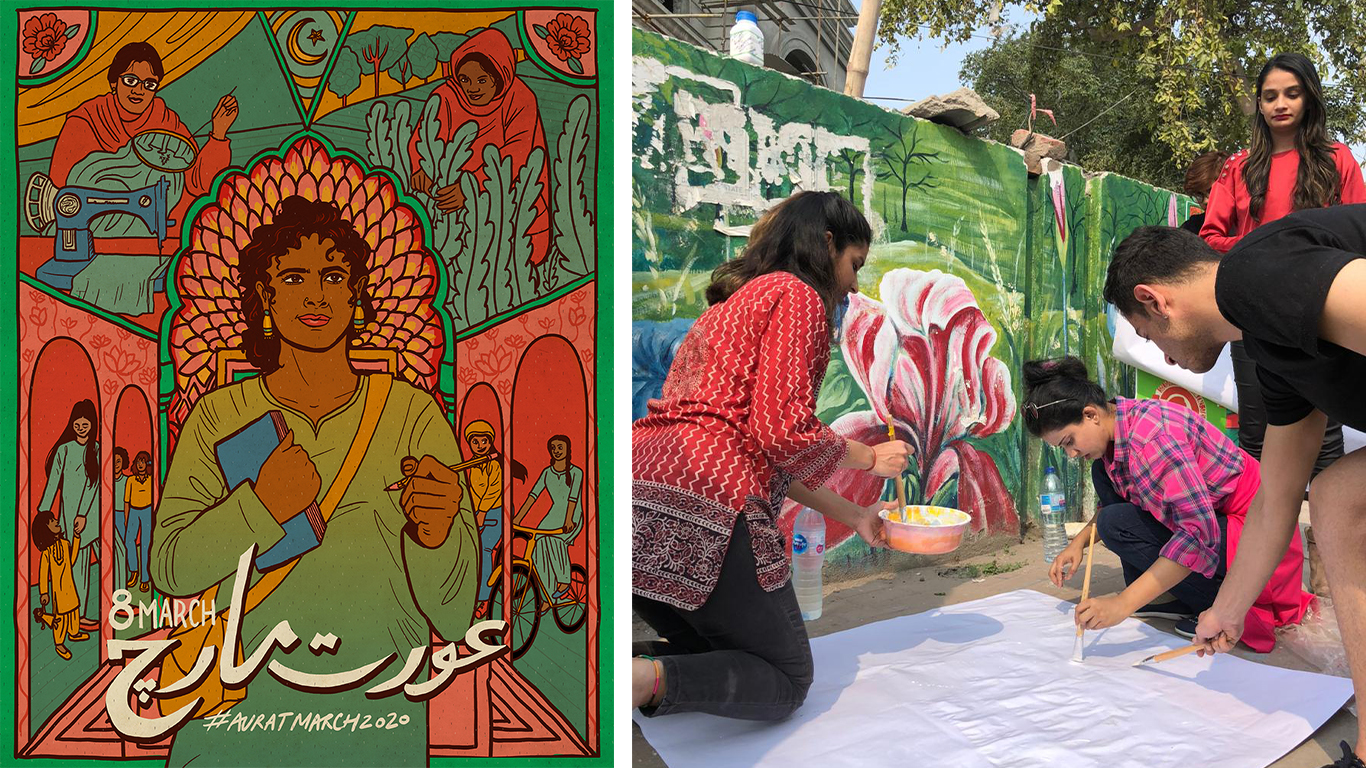 My poster for 2020’s Aurat March was dedicated to our collective hopes and dreams for the women of Pakistan. In the centre is a girl pursuing her education. On top are women at the core of our economy- the home-based workers keeping our crafts alive and the farmers who work in the fields. Below, the archways lead to a world where girls and women are safe outdoors, happily cycling, walking and being themselves. The central figure is also an homage to Malala and her quote, “One child, one teacher, one book, one pen can change the world.” 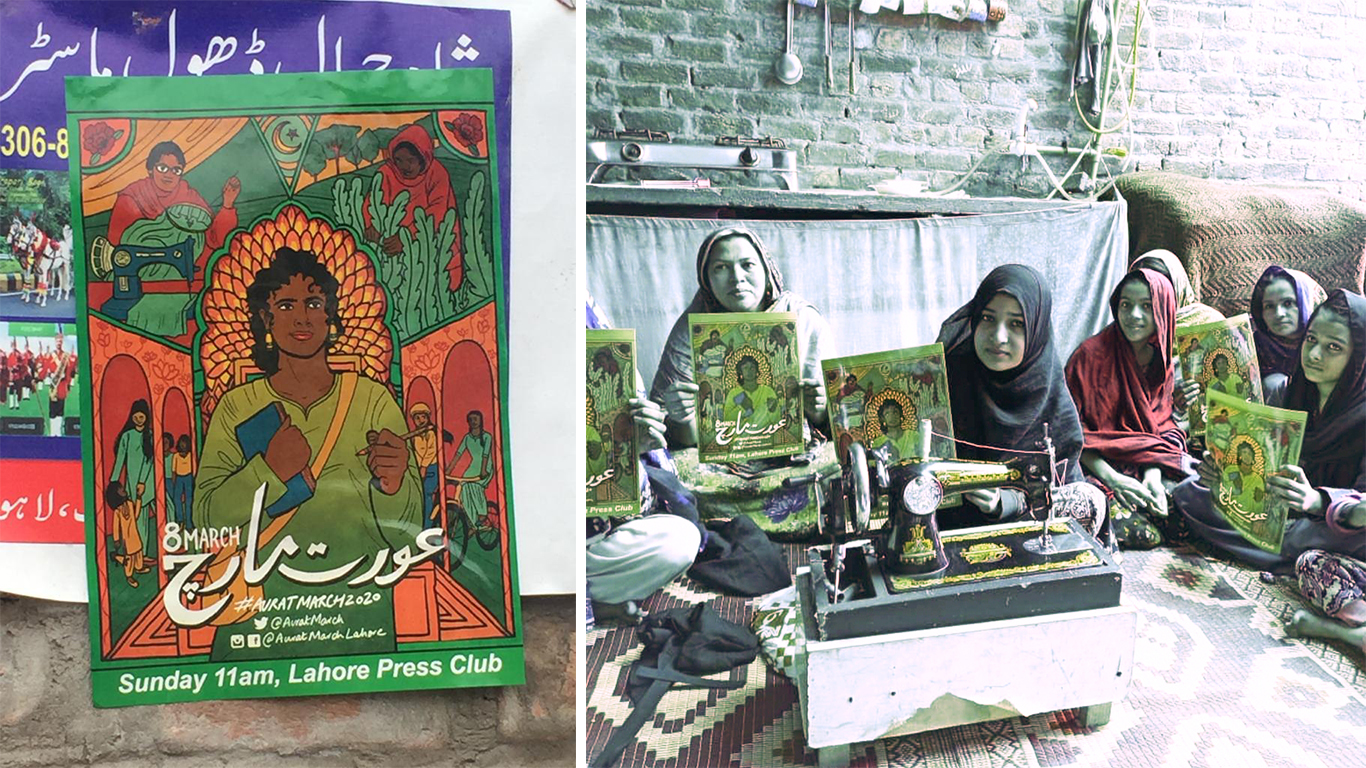 The artwork for the march has now become synonymous with the resurgence of the women’s movement. For the last two years, the posters have been freely available to download on my website. They were pasted in the streets, shared on social media, and are now being studied for their symbolism and political thought. They were also used by volunteers for community outreach and to talk about the movement’s manifesto. 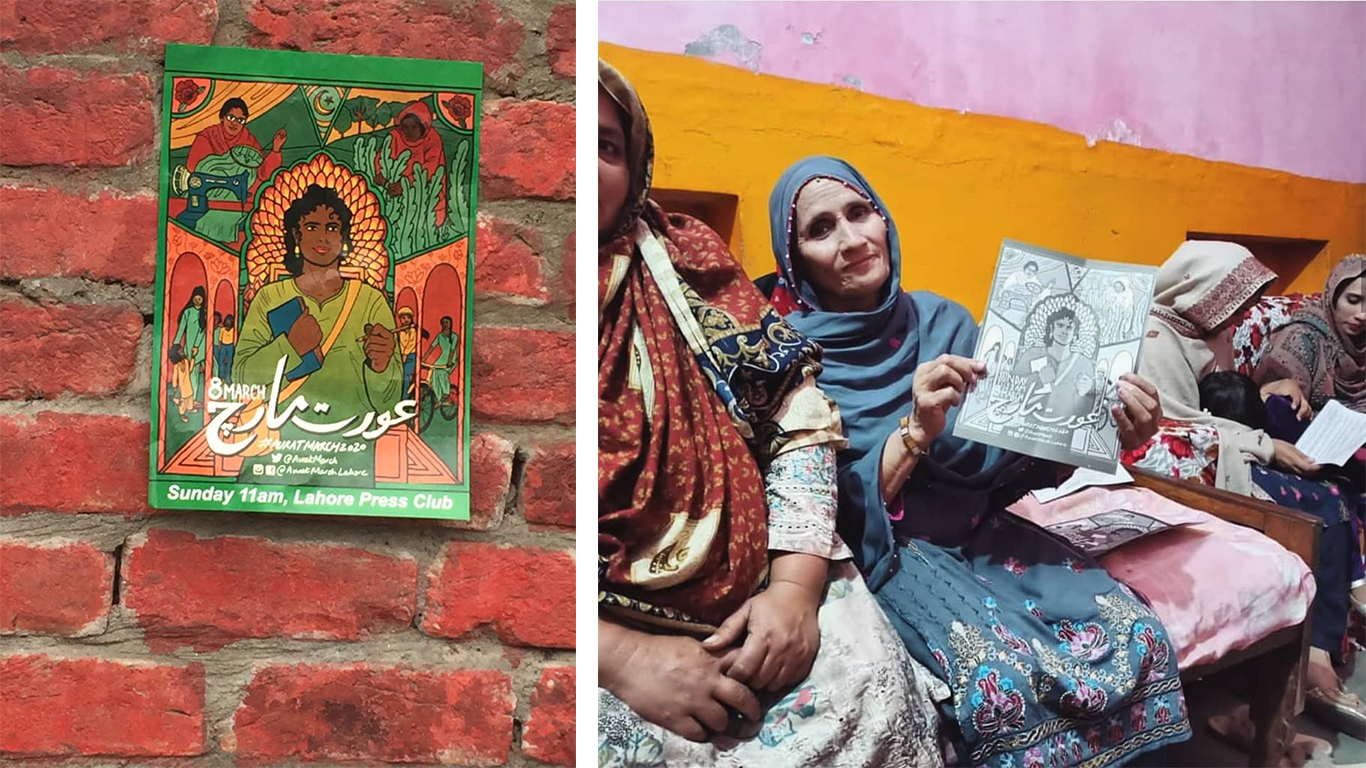 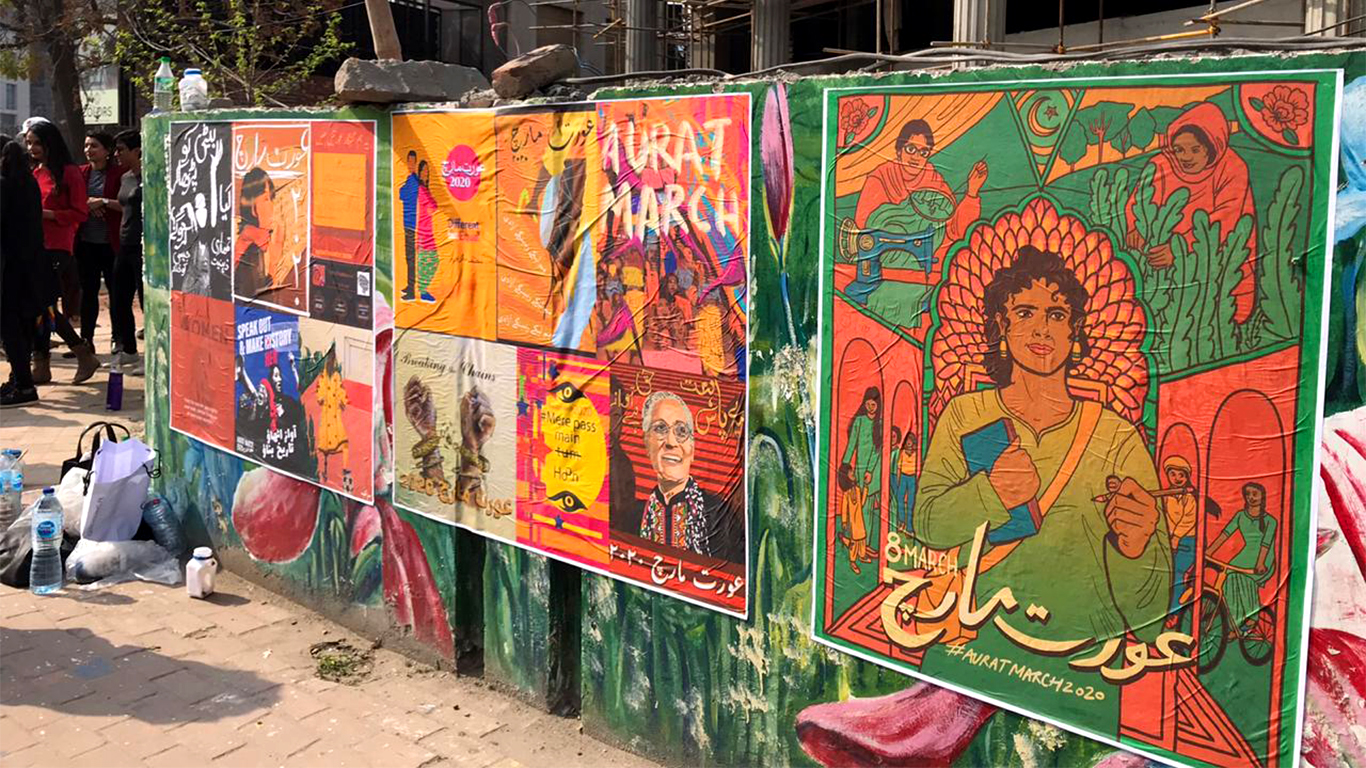 The submissions we received for Aurat March 2020 posters were beautiful- they are the thoughts of girls and women across Pakistan that they often don’t express in public. However, within hours they were torn down. The march’s polarizing effect in society has also meant that my artwork is a target- it is often vandalized, and those using the art as display pictures online or as posters in the streets are often threatened. But these posters represent a Pakistan that is also for women, and we fight on.