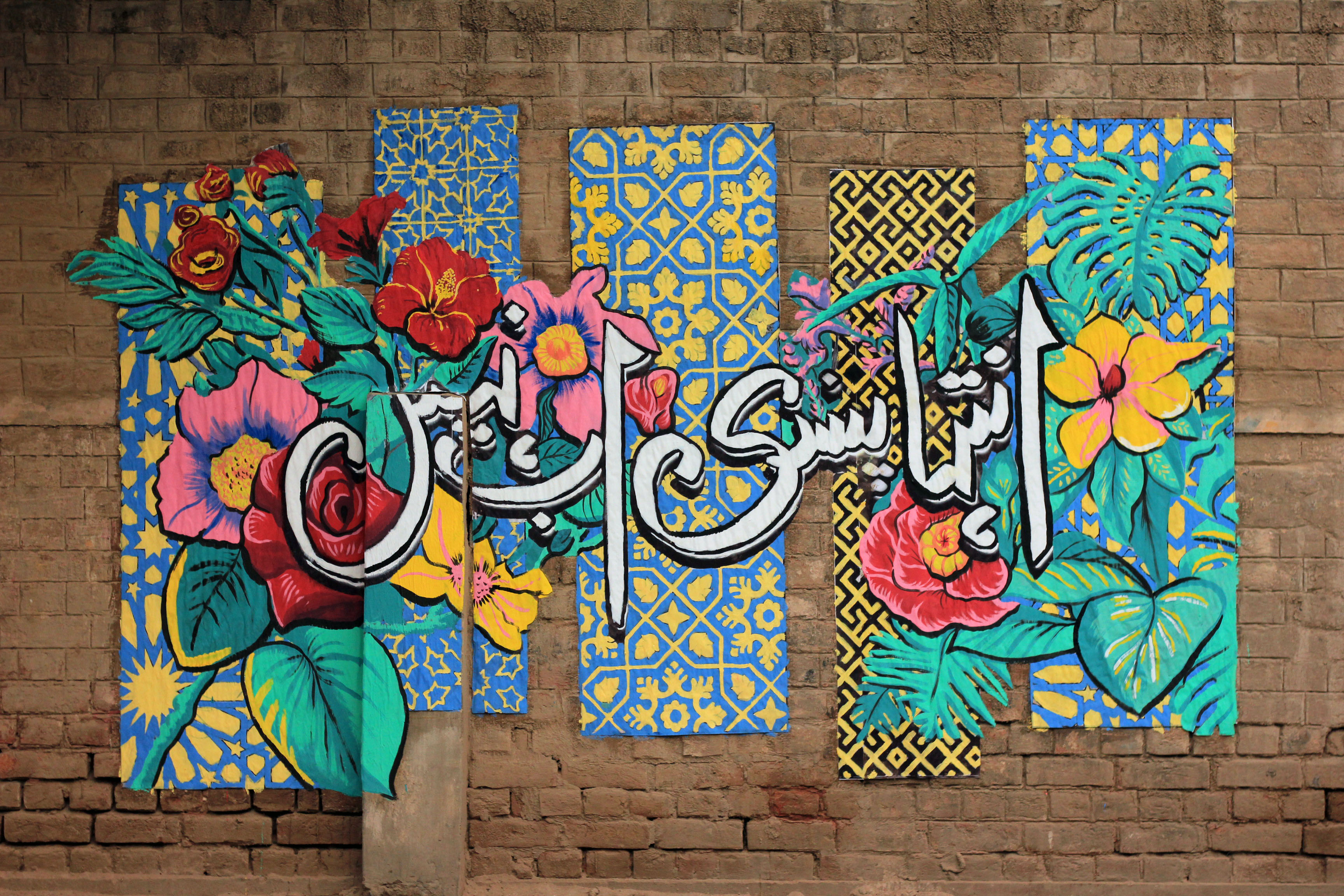 On Easter Sunday, a suicide bombing occurred at Gulshan-e-Iqbal Park in Lahore. The bomber detonated himself near where children were playing on swings, leaving a death toll of 72 of mostly women and children. I live near this park, and before I knew what had happened, I could hear a cacophony of sirens and ambulances.

This took a lot of us right back to 2010, when bombings in Lahore were common and a frantic rush to call up everyone you know had become the norm. There is usually so much helplessness in times of crisis, but this time felt different. Thousands of people donated blood, gave their time and food freely away to the victims, I saw friends scrambling to make tech solutions for disaster relief, do puppet shows for the children at the hospital, give out toys.

My sister and I were asked if we wanted to paint a mural at the park, a small gesture that made us feel like we gave a part of us back too. This was our small way of saying we all citizens of this country, and we have a message of love and tolerance for this community. Thank you to my friends and family who came to paint with us.

The morning we set off to paint, I was worried about what lay in store for us. We had no official permissions, and the mural’s subject matter was so emotional and I felt the pressure to do it justice. The way the day unfolded, by first winning over the policemen who were stationed to stop people from entering the park, and the conversations we had while painting, were magical. The response these pictures got on social media was even more overwhelming. Media outlets picked up on our activity, and soon thousands of Pakistanis had seen and shared these images. I am personally touched that our small gesture was so appreciated, and am overjoyed to find that so many agreed with this message of love and tolerance, and that so many found art to be a source of joy and an antithesis to violence and hatred.

You can read more about the wall in the article by Forbes correspondent, Sonya Rehman.

My thought process behind the mural’s design was to paint something beautiful for families visiting the park to stop and look at. I felt it was important to send a message of peace, love and empathy, and not channel the anger we all feel at the horrific events that occurred. As I was working on the composition the day before, I happened to drive around Lahore and this city in spring provided all the inspiration needed: a simple, heartfelt message of religious tolerance framed by the beauty we have around us. 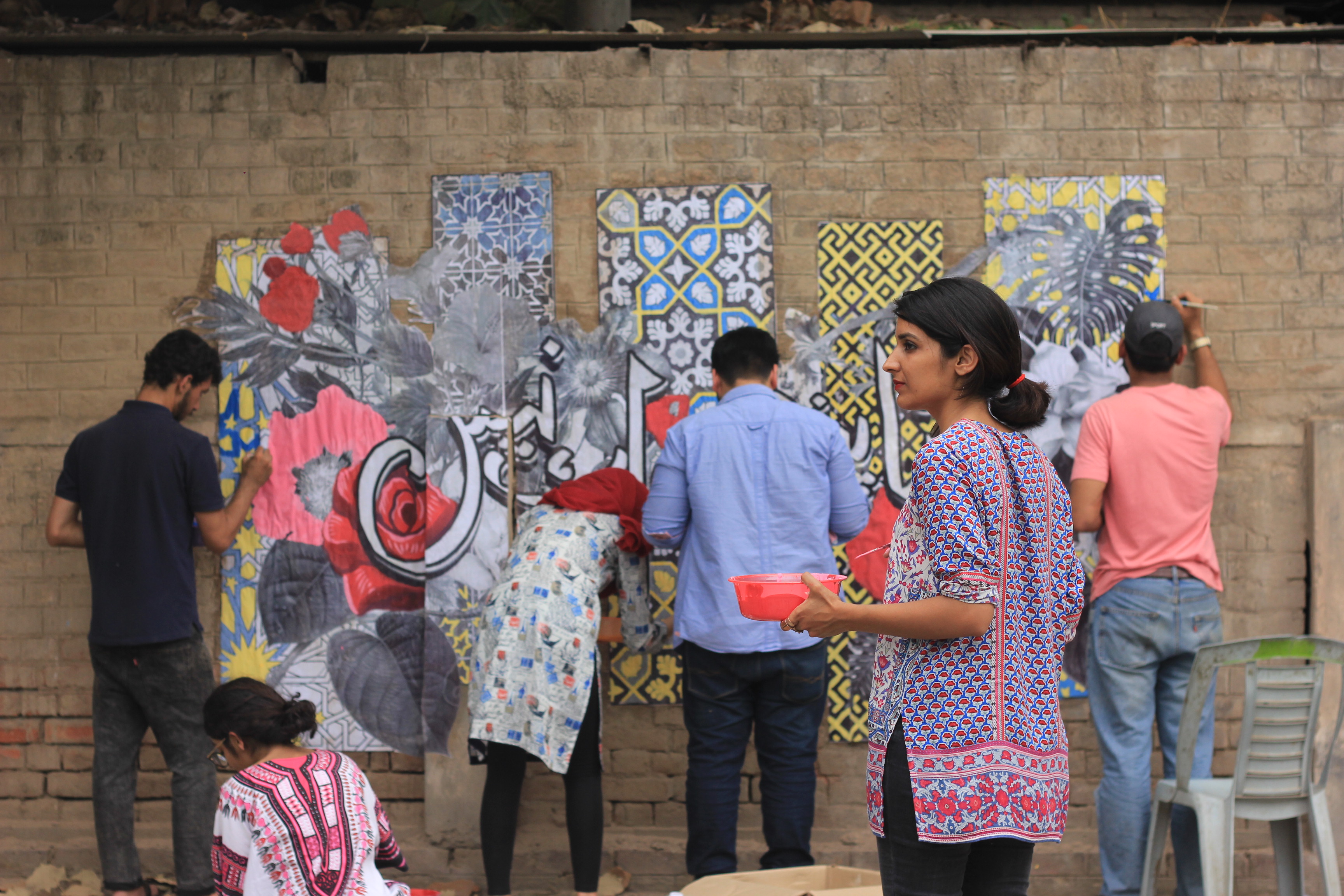 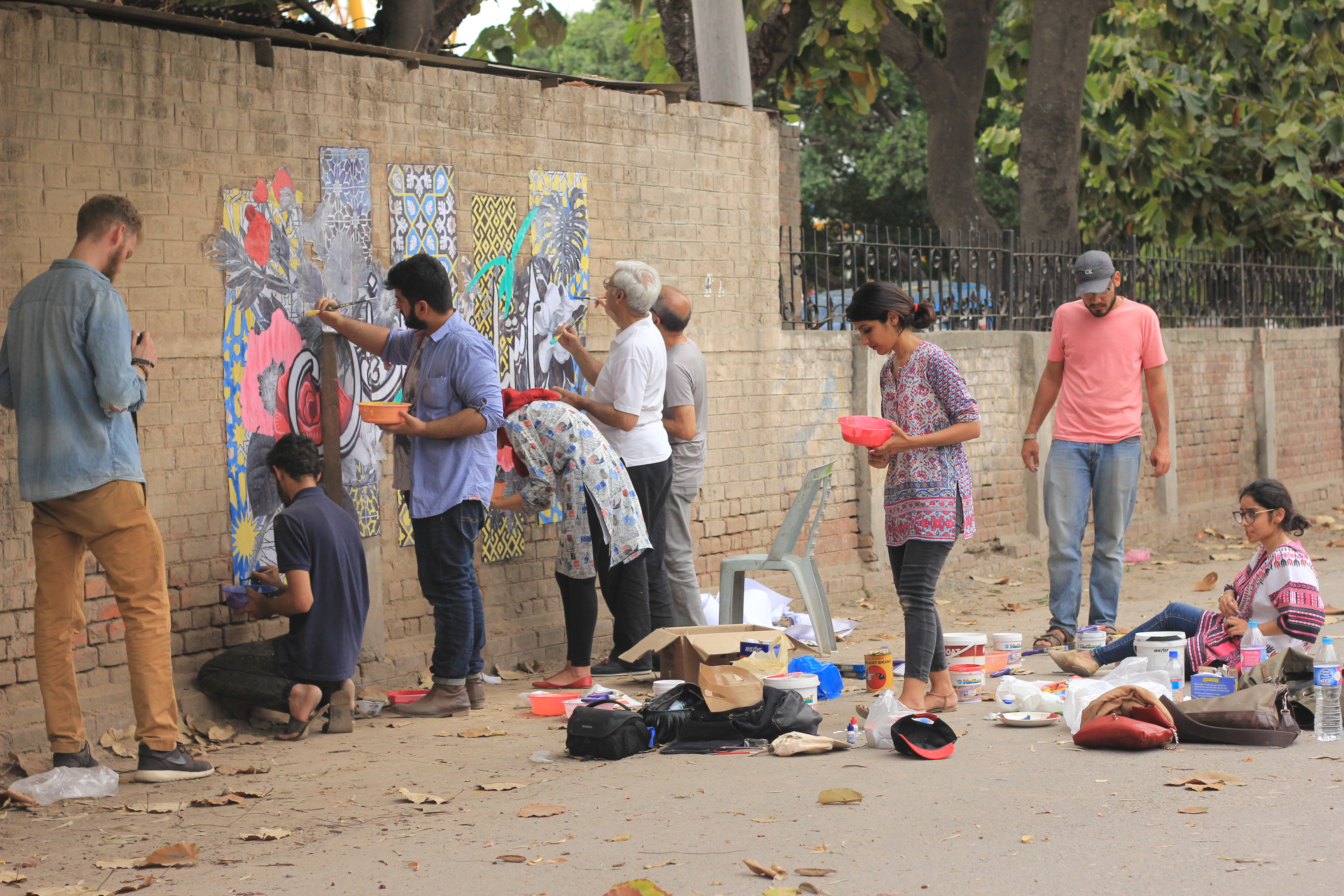 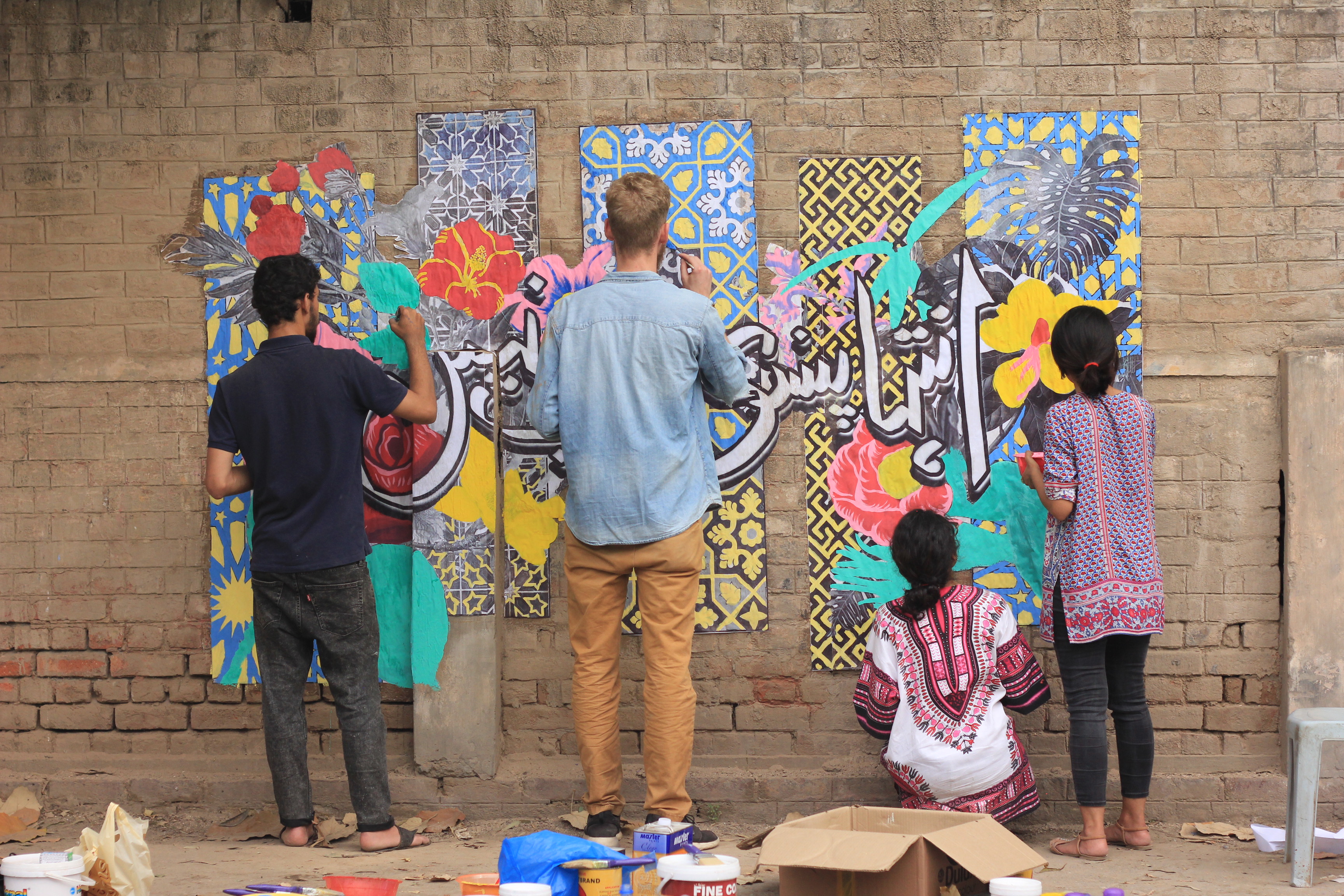 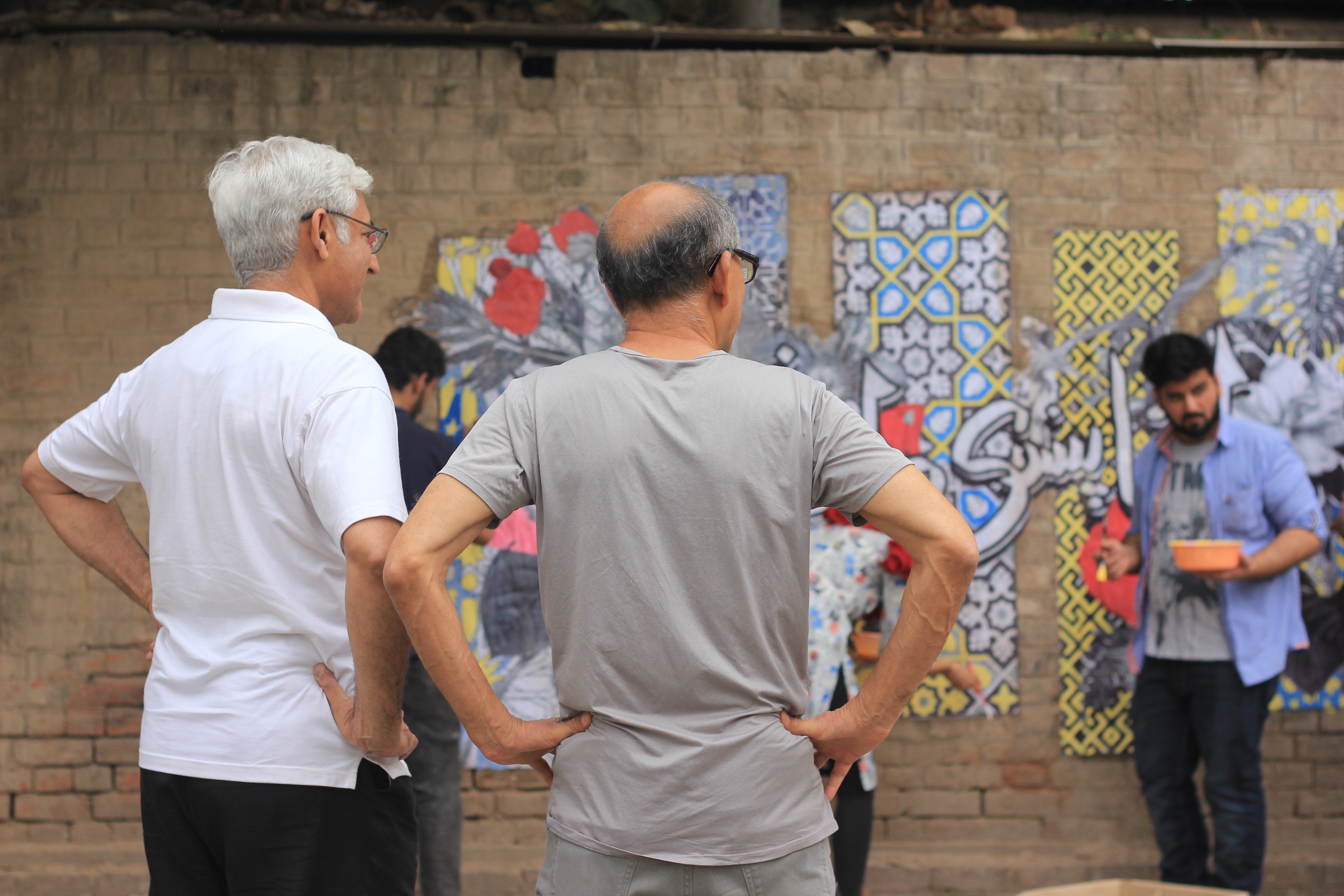 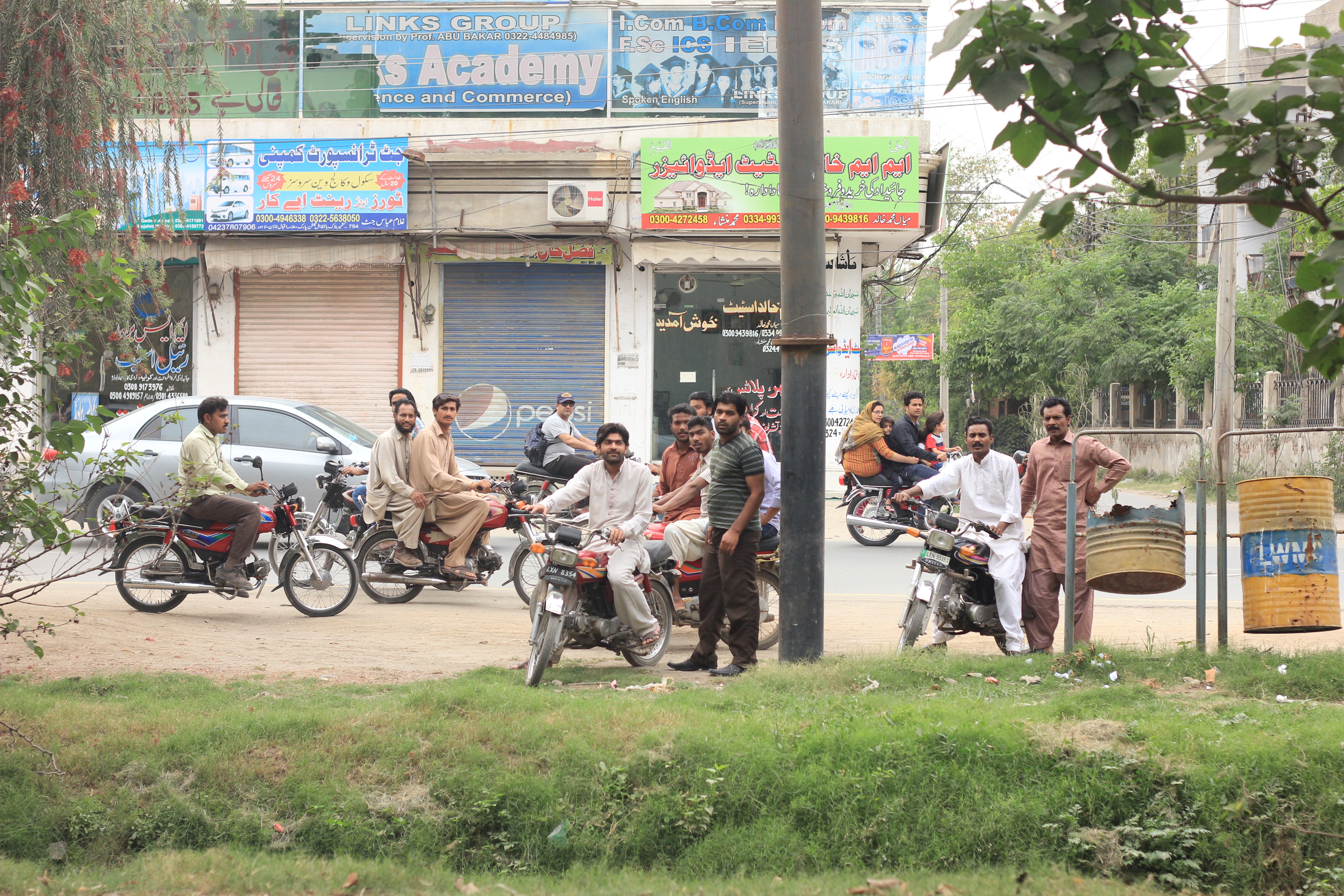 As a designer/illustrator who lives in Pakistan, I struggle with what value I can bring to society, especially when a tragedy strikes that shakes you to your core. Public art, however, takes sharing of joint sentiments to the place where it probably matters most: to the streets. This is art for its own sake, putting it where everybody can encounter it, where hopefully it sparks a thought, a conversation. 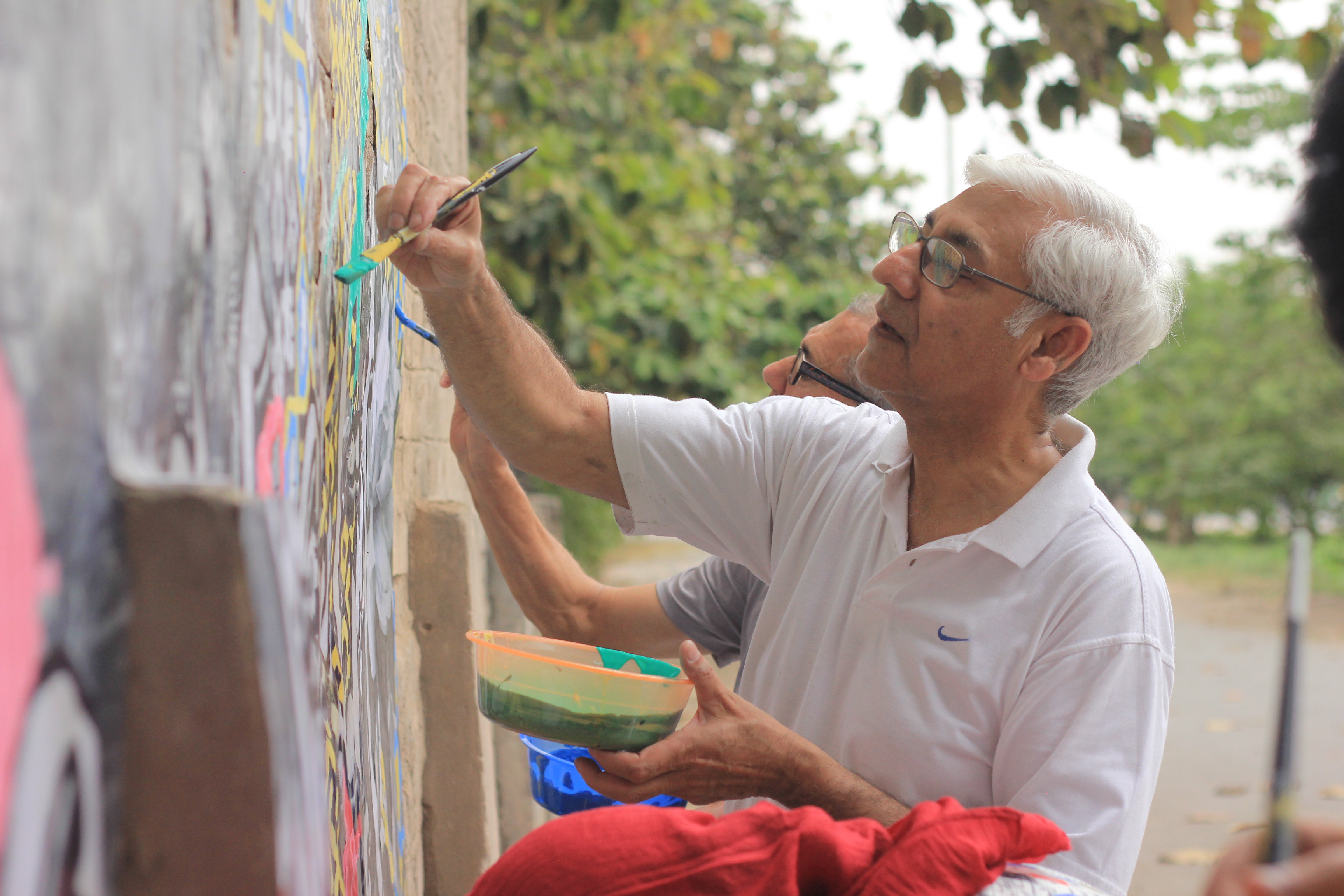 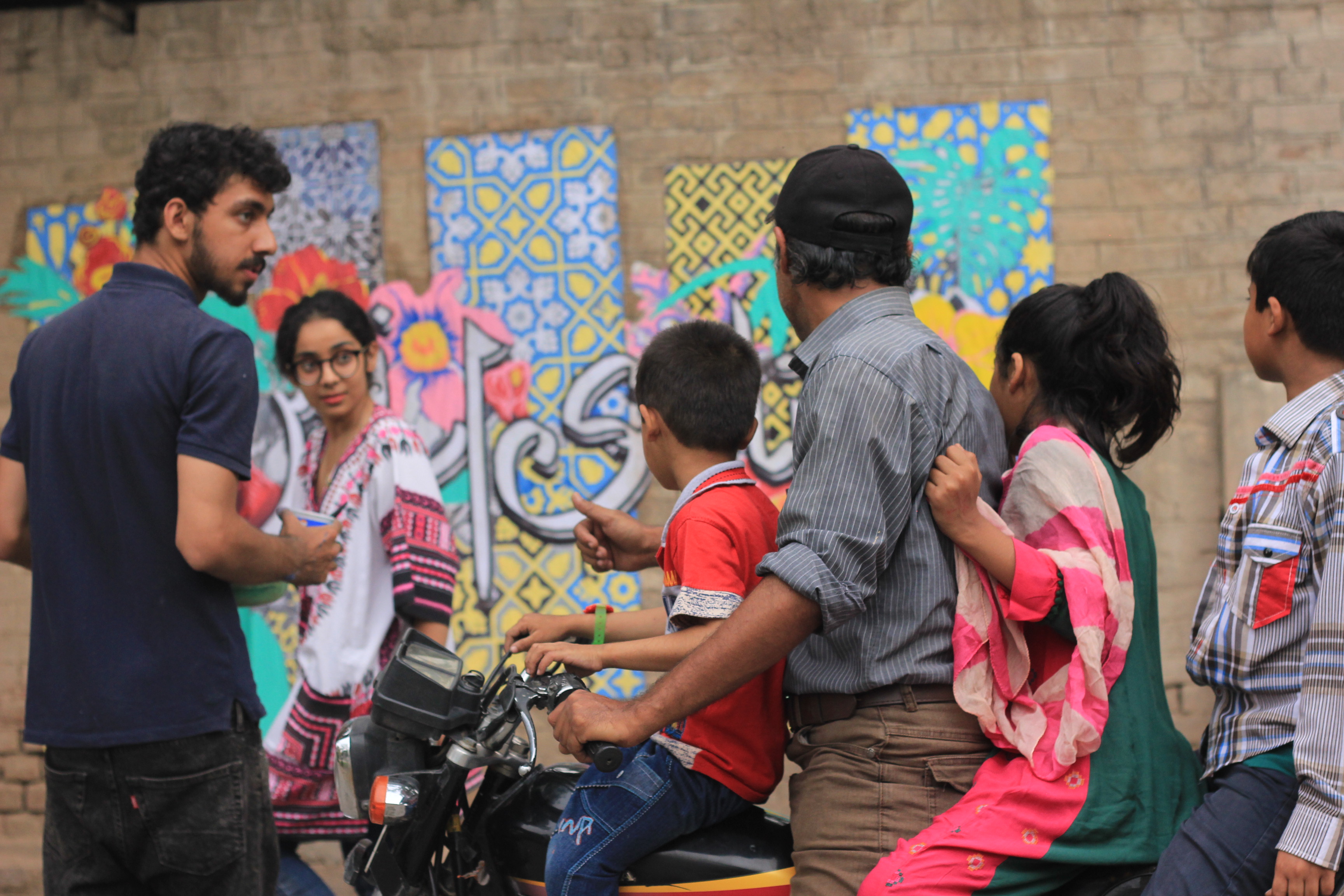 We also met with families who stopped by, and we talked about the bombing last Sunday. Many of these families lived nearby and visit the park. Grief was shared and tea was offered, which is the most wonderfully Pakistani thing to do. 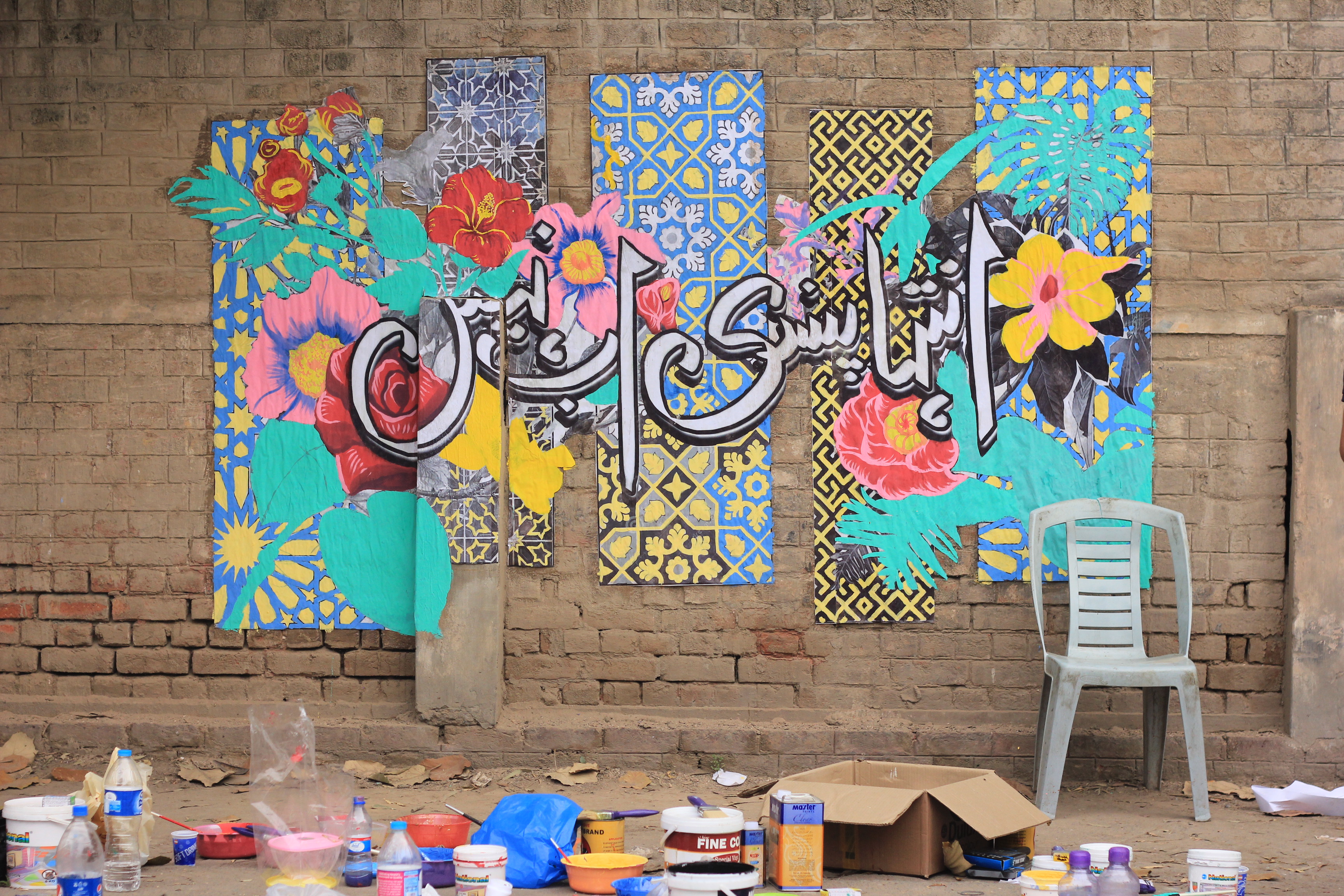 The design says, “Inteha Pasandi Ab Nahi” translating as “Extremism No More”. The design is meant to be a message of love, new beginnings and flowering hope. The patterns at the back are those I see in our buildings, in our places of worship, our cultural landmarks, and our houses across the country. We are capable of such love and beauty, and I hope this helps us remember this. 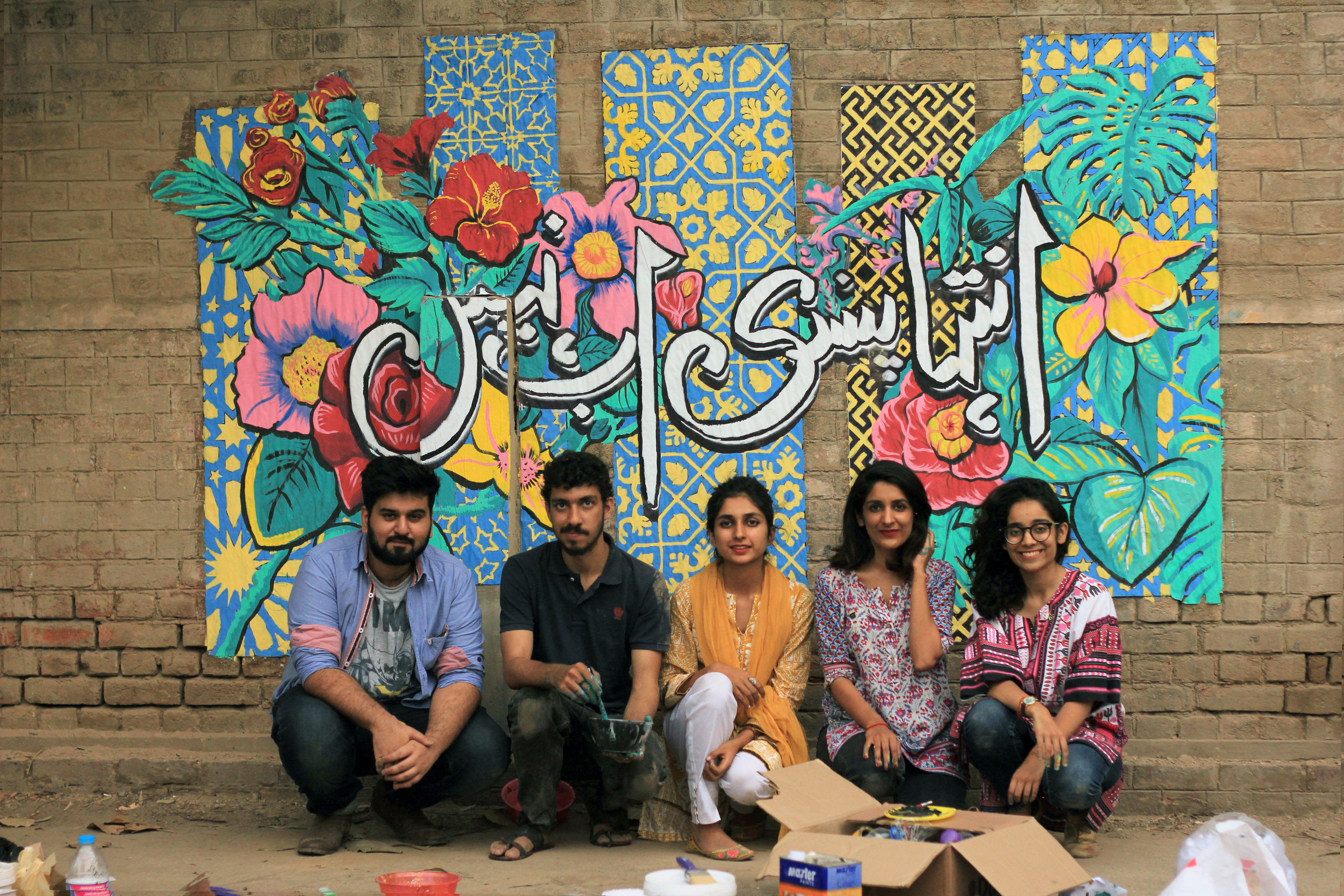 Thank you to these wonderful people who helped make this happen on a hot Sunday afternoon.