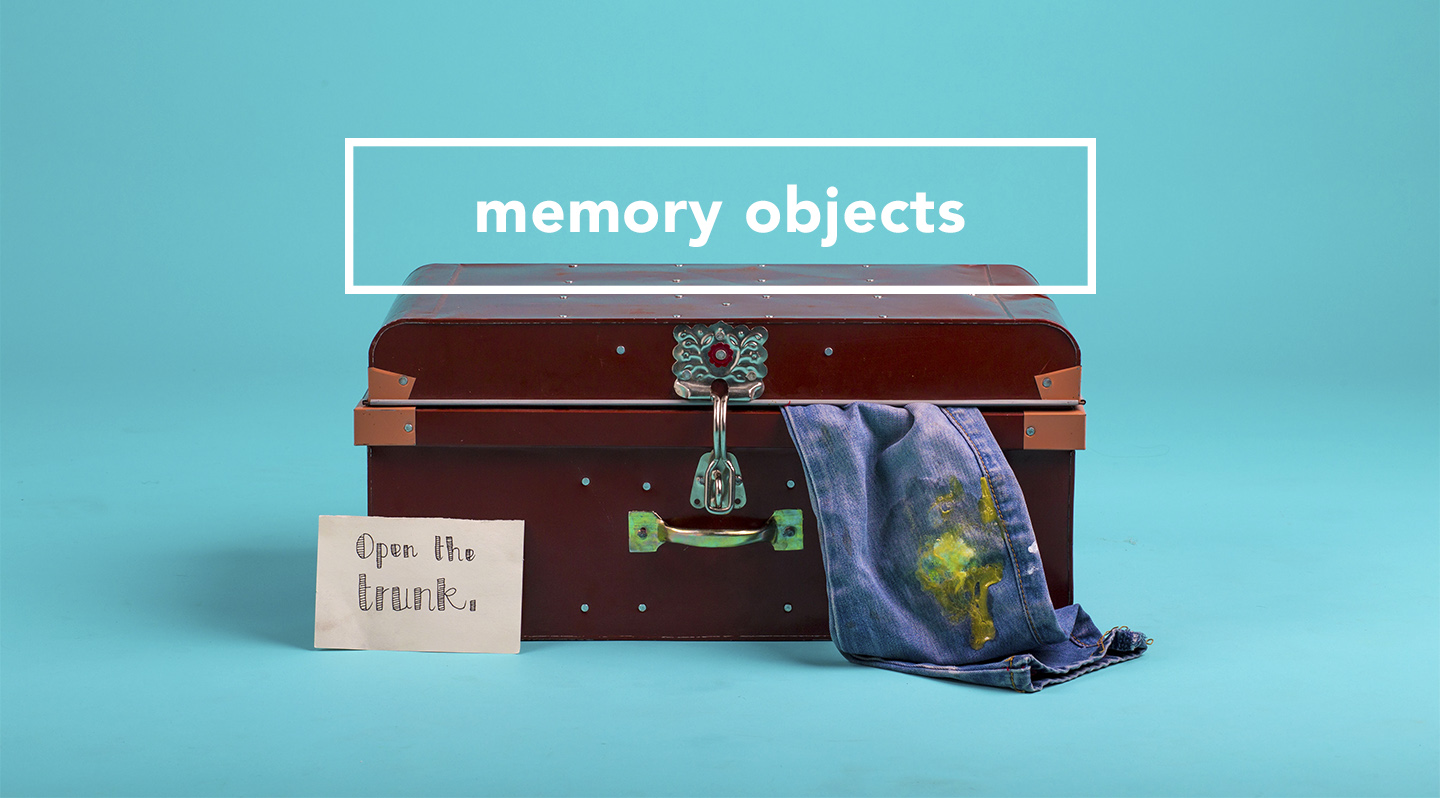 We are who we are because of our experiences. Sometimes these experiences crystallize themselves in the form of objects that trigger our memories. A memory can give an object life– a soul– of its own, taking on a meaning beyond its physical form. Today, more and more triggers for memories are digitized: whether through a Facebook album or a Snapstory, there is an unlimited sea of digital memories now online.

How can we use technology to bridge the gap between our intangible memories and our associations with the tangible objects we experience?

With this project we hope to bring the stories objects can tell to life using sensors for input; arduinos to process the data and a resulting output that leverages at least one of the user’s five senses. Students were asked to take an object that they could link to a personal story/memory and design a user experience to tell this story. 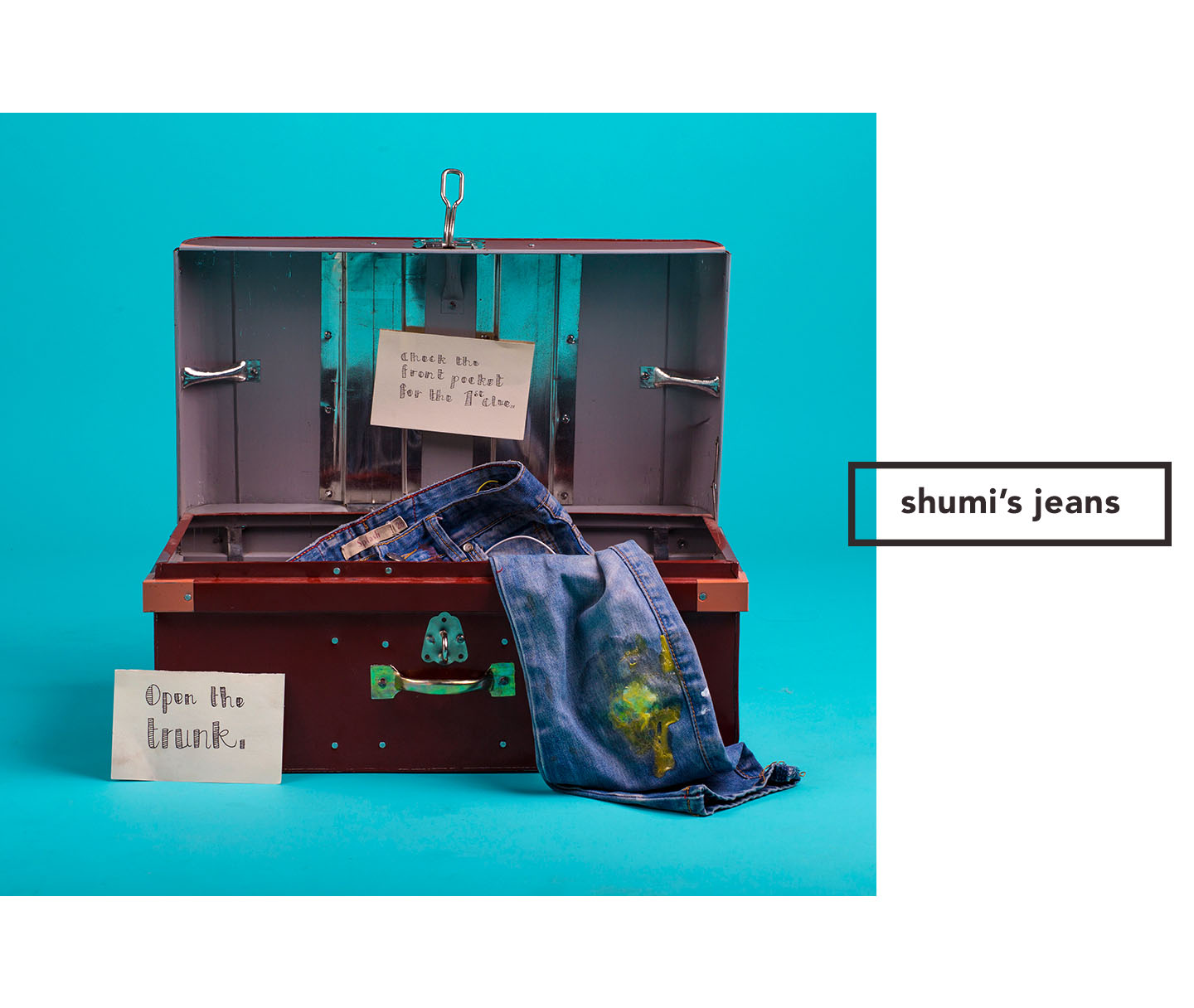 Shumyle wore these jeans over the course of his college life, and they have become a record and testament of his adventures over the years. Each stain and tear has a story to tell, making the jeans an object of value (despite its outward appearance) and imbued with memories. This project hopes to celebrate imperfections and reminds us to value the journey of an object, regardless of what society perceives as acceptable appearance/ behaviour.

The stains and cuts on the jeans have push buttons installed under them. Pressing a button plays a recording saved on an SD card reader connected to the Arduino, and the user hears the story through a pair of headphones connected via an audio out adapter. 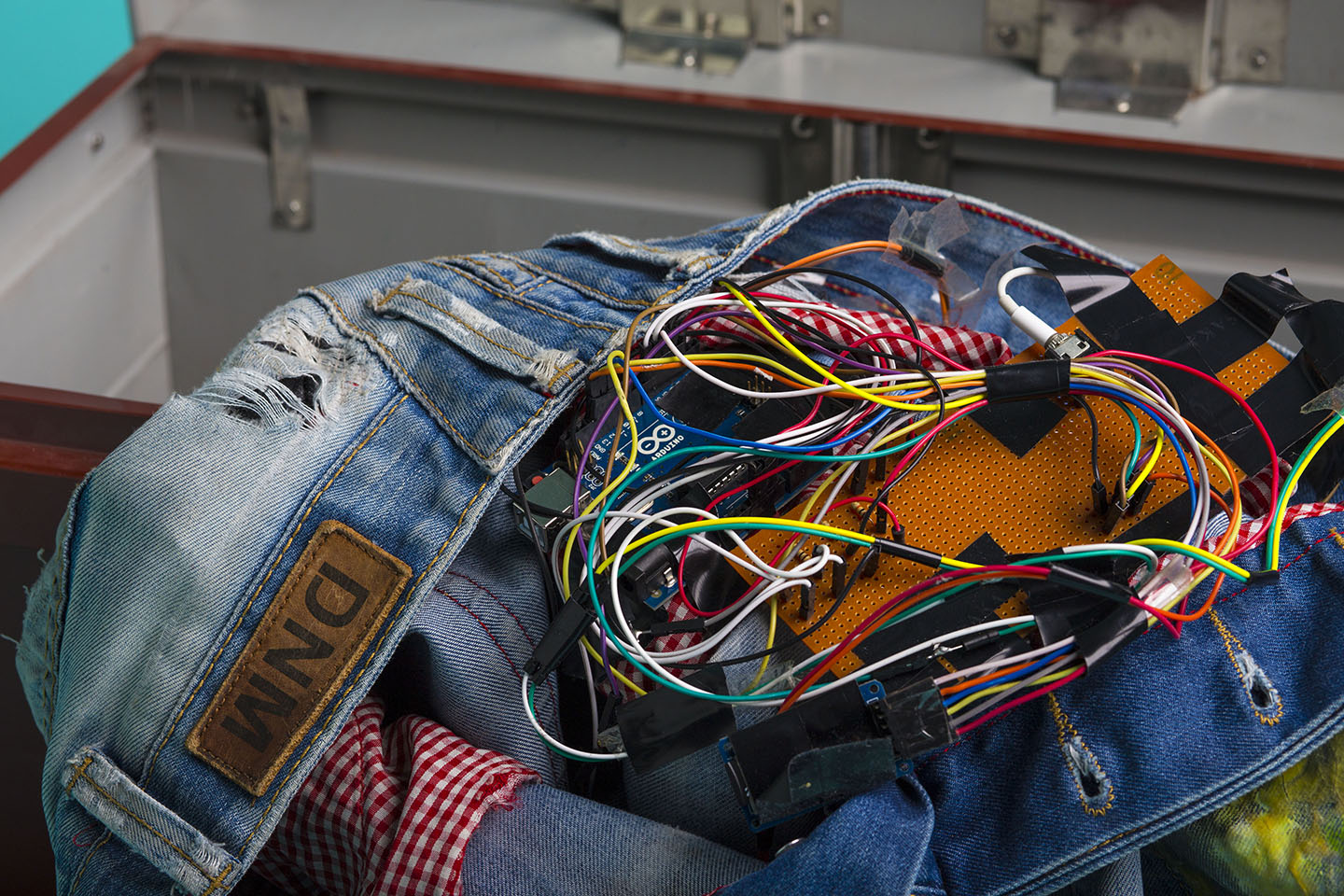 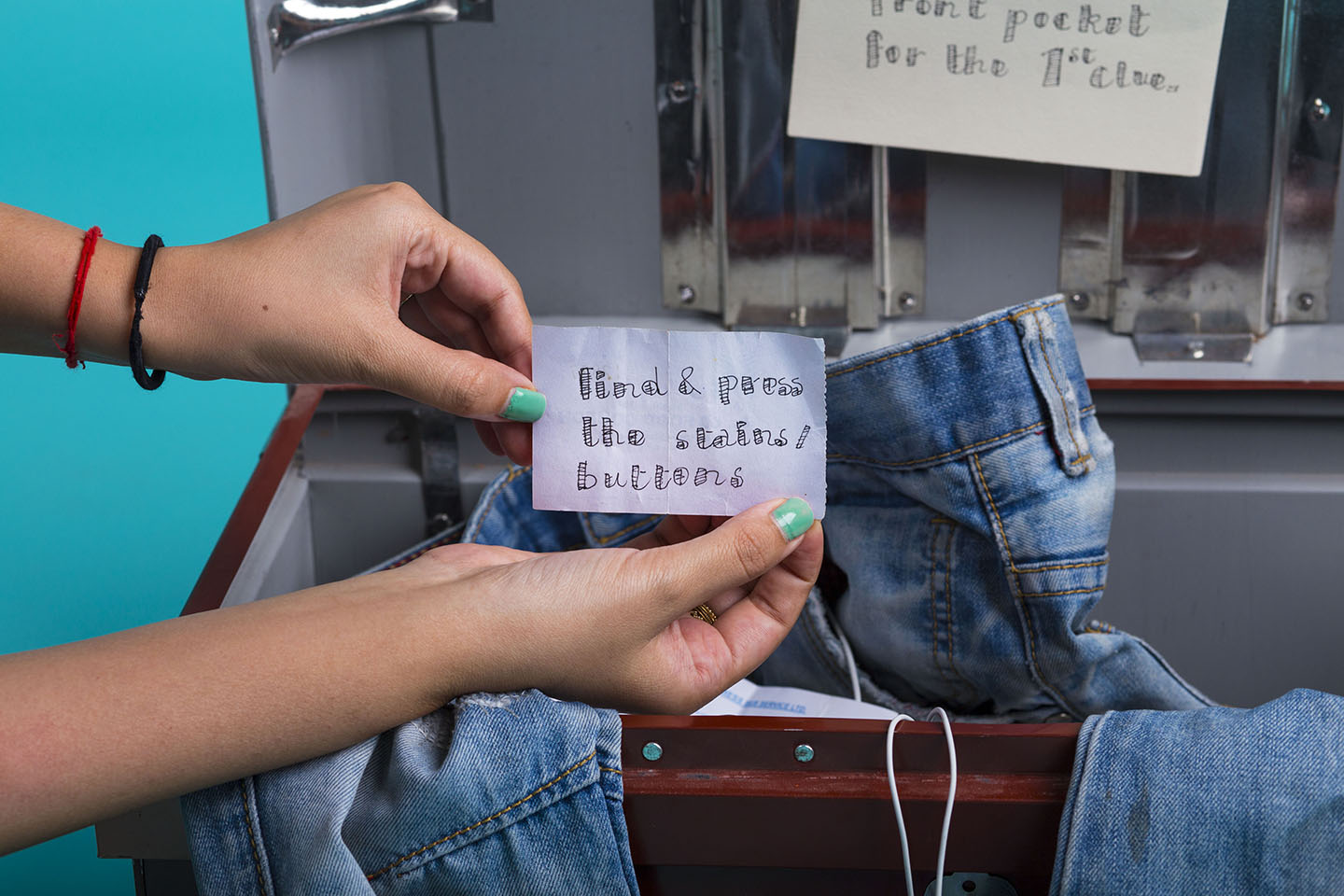 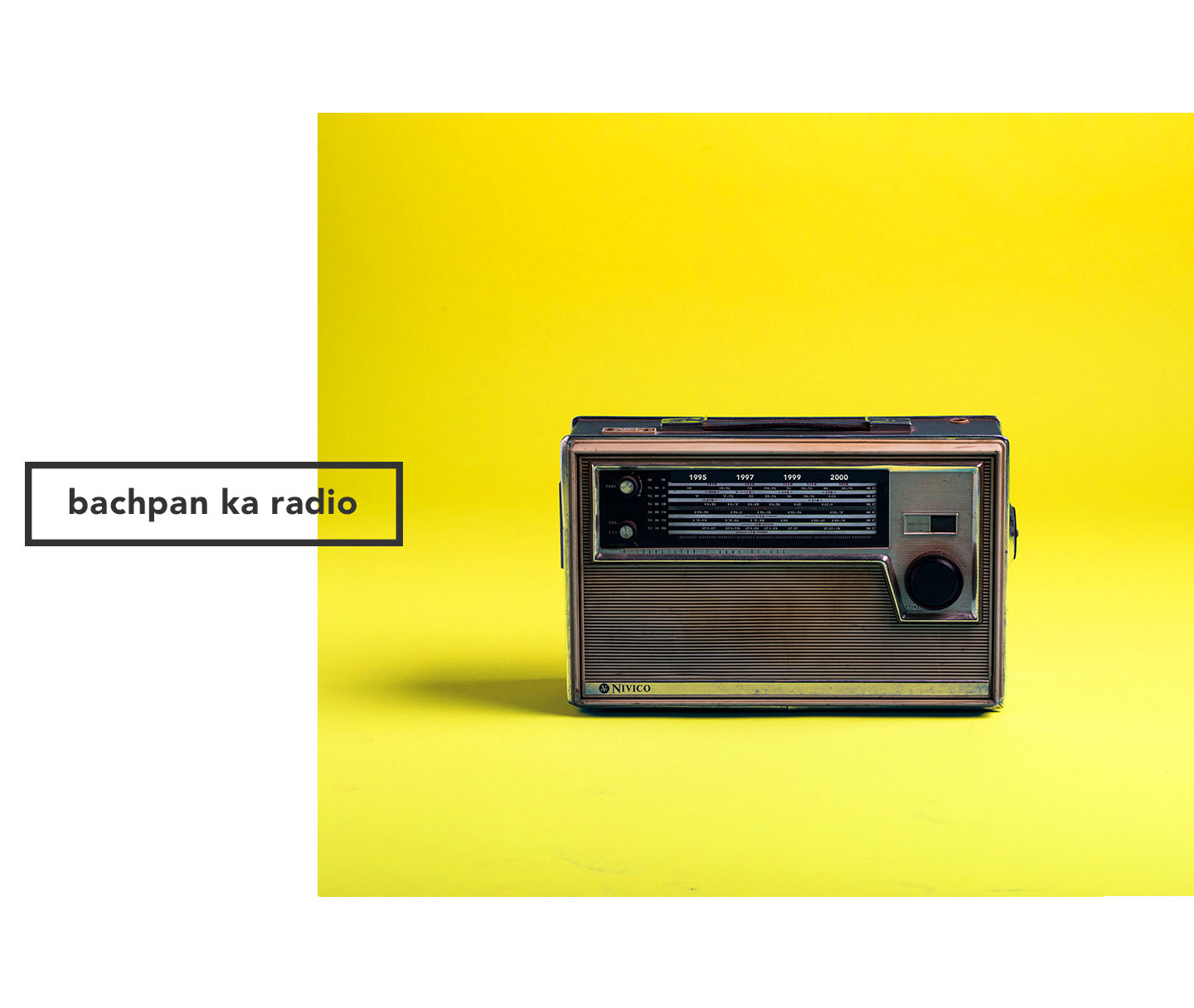 This radio belonged to Saad’s grandfather who let him play with it growing up. The group decided to use the radio as a way to access their collective memories of growing up in the 90’s. Each radio station plays nostalgic sounds from that year using sounds of cartoons, games and iconic commercials and dramas.

An ardiuno, SD card shield and potentiometer were used to input different values for our radio station (years in timeline) to get different memories (sounds) as an output. Each childhood memory was given a specific value to play the audio file from SD card shield. We used range command and loop command for better output. Whenever the potentiometer was used, a different sound track played on each channel. 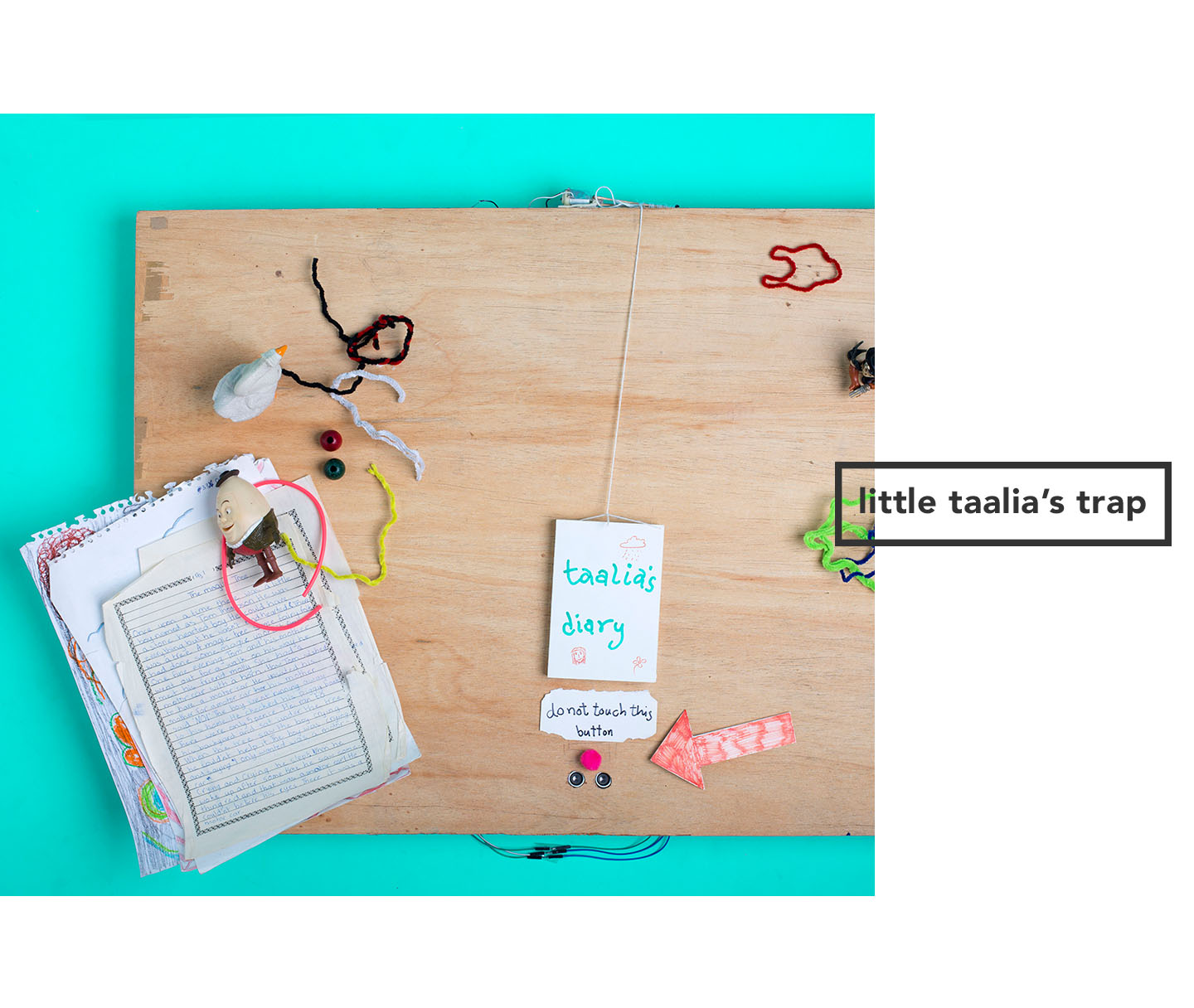 When Taalia was a little girl she would write her innermost thoughts in a diary. She would hide the diary from others, but her brother would always find it and read her secret writings. This project deals with the innate human desire to share information but at the same time be safe from unwanted judgment. Here, the diary is seemingly displayed openly, but as soon as one comes close to it, the diary runs away from prying hands.

A pom-pom button (with a hidden sensor) is used to grab the user’s attention. As soon as a hand comes 10cm near the sensor, it initiates the DC motor which starts coiling the thread attached to the diary, abruptly pulling it away from the user. 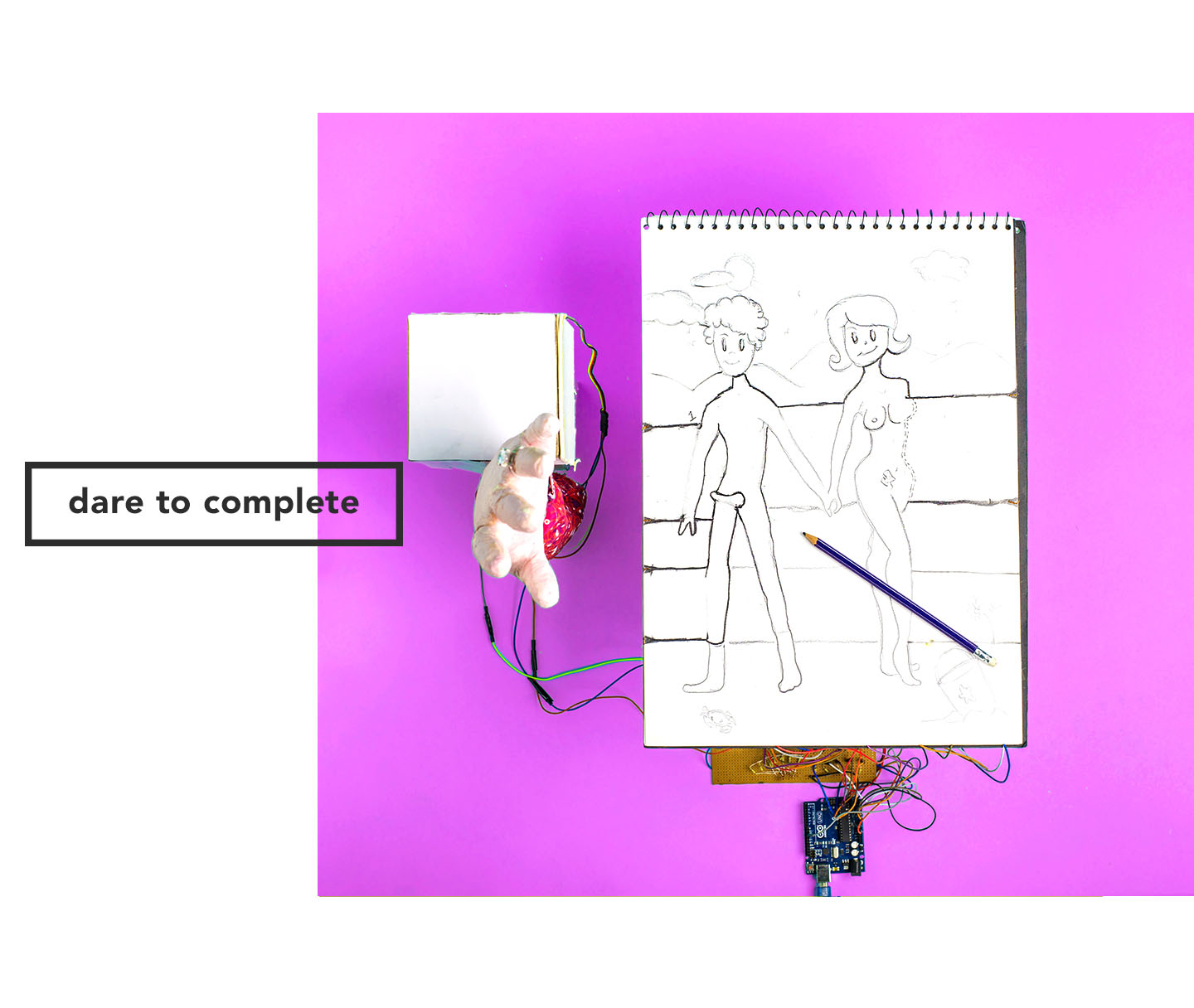 Ever since he was young, Imran has been drawing naked figures. Whenever his sketchbook was discovered by mother, he would scolded or slapped for these drawings, and he would be forbidden from completing his sketches. In this project, the group playfully relives this experience of growing up in a culture where nudity is considered taboo and scandalous.

The project uses graphite lead as a conductor using an incomplete pencil drawing of a male and a female. Switches and wires which were connected to the ends of the paper and an Arduino was used to build capacitive touch sensors. As soon as the user tried to complete the sketch, a hand (operated by a servo motor) would slap you twice and would not let you complete it. 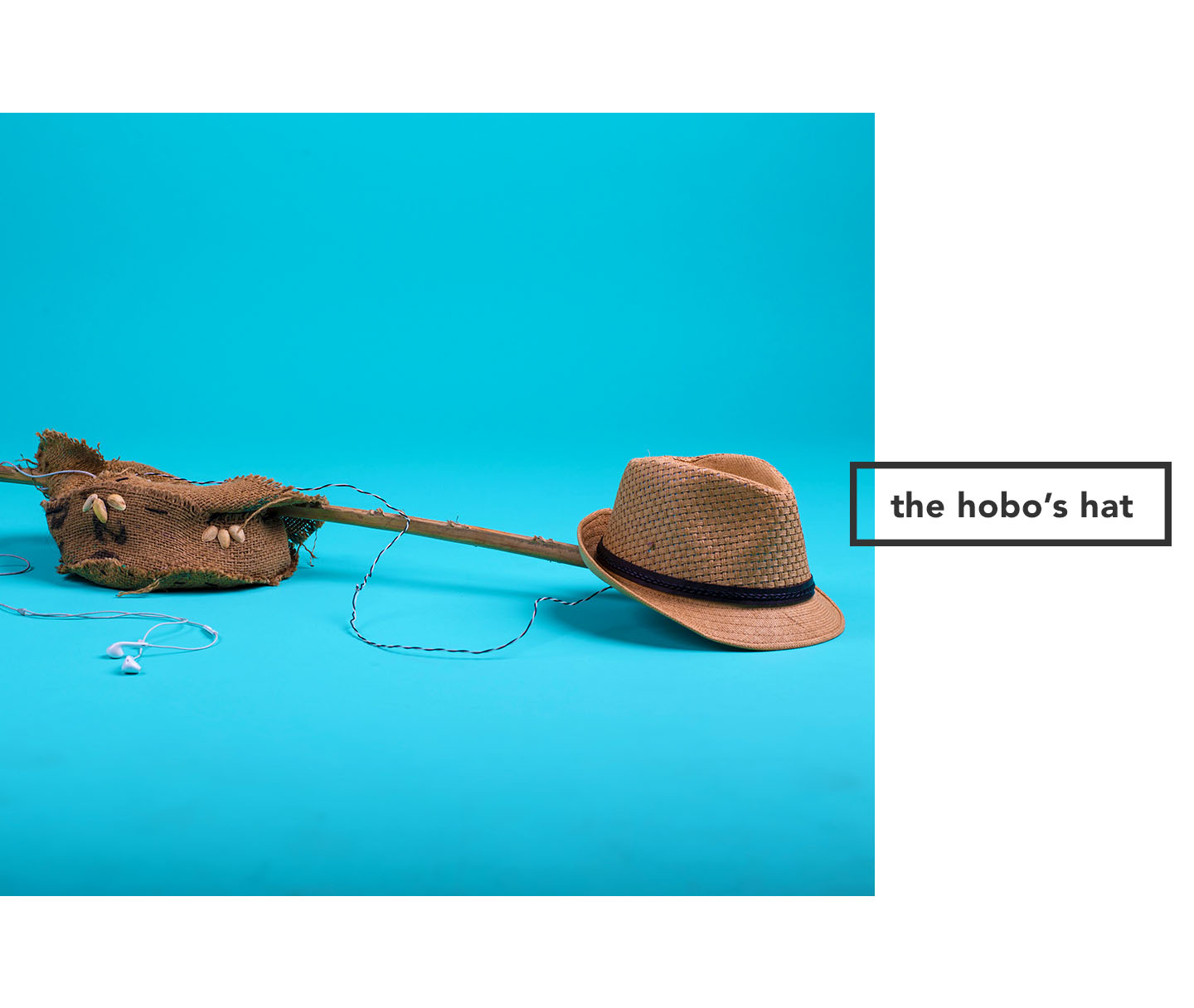 Musa and Omar both love to explore new places, walk through unfamiliar terrain and collect stories through these journeys. They reminisced about their walks and felt that the music they heard on their travels added to their experience. There was a feeling that certain musical genres related to their walks during the day, and that there were genres that suited their nocturnal wanderings.

This project creates a costume of sorts for a vagabond (with a love for music) in the digital age. A light sensor is fitted inside the hat which is connected to an Arduino in the rucksack. With the variations in the light detected by the hat, different songs play from an SD card that correspond with the time of day. Walking through different lighting conditions changes the soundtrack of your journey. 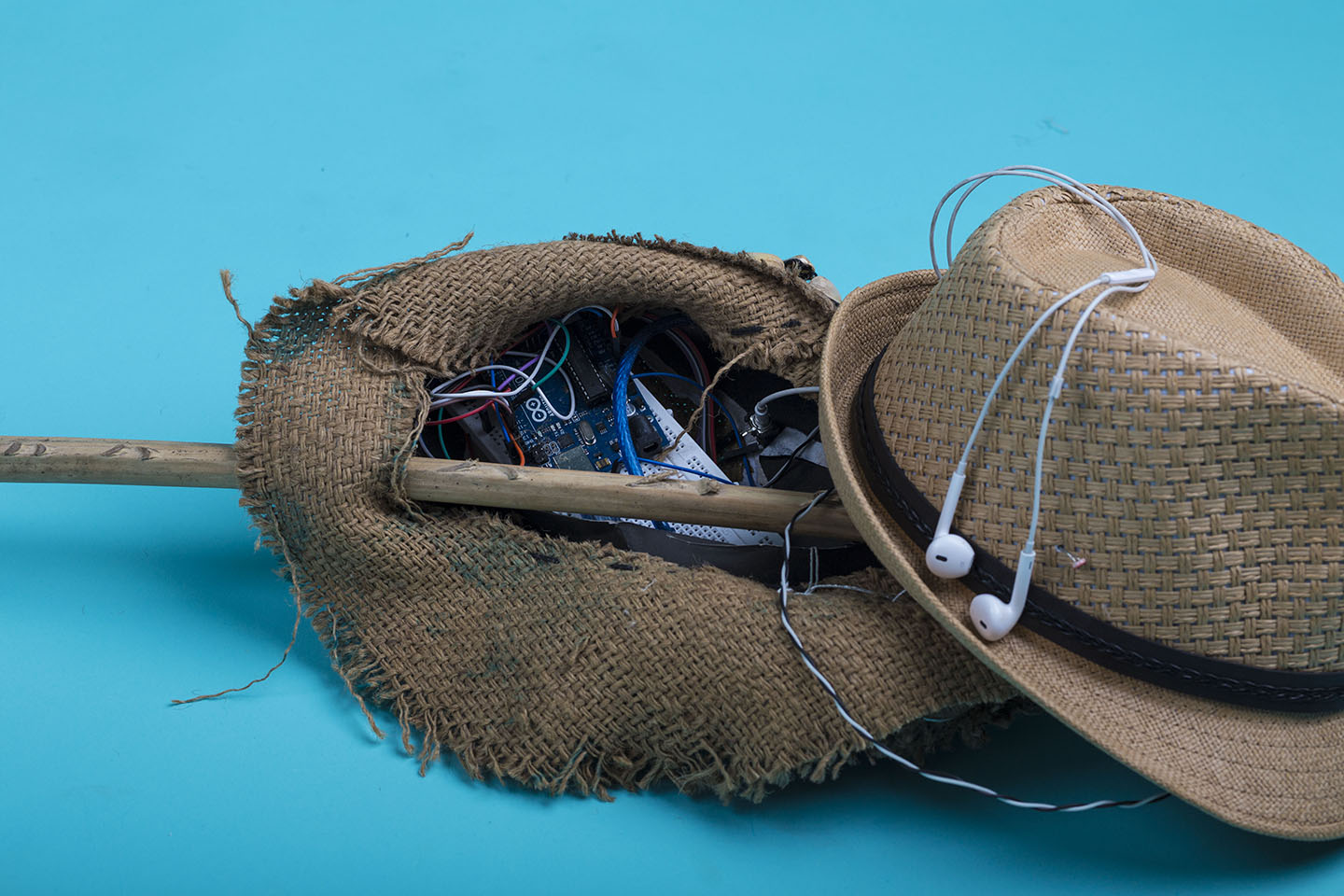 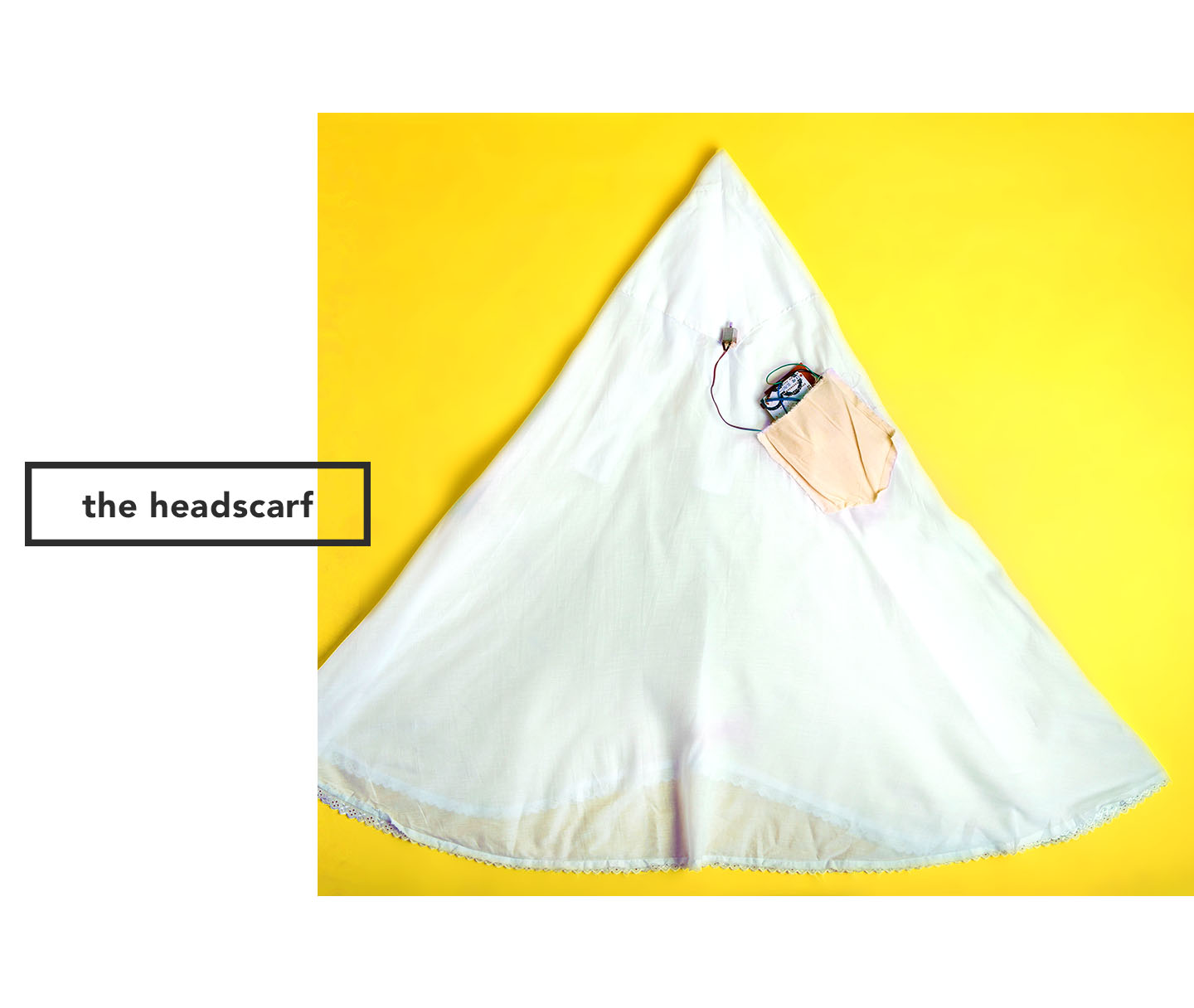 Like most children in Pakistan, Sana was taught the Quran by a Qari sahib (male Quran teacher). It was in one her lessons that she suddenly remembered mother’s constant instructions to not sit too close to males and to always stay covered. These words were so embedded in her mind that she unconsciously began to move her chair further and further away from the Qari sahib until he finally noticed and exasperatedly called her out on it! She recalls this memory with a mixture of embarassment, laughter, and scorn for the culture of fear we are brought up in.

This project addresses how society puts the onus of modesty on women and shames them into considering the male gaze as a result of their behaviour- all in a tongue-in-cheek manner. A modest headscarf is given to the user to wear. A sensor connected to an Arduino detects presence around the scarf and if anyone comes too close, it triggers a sharp vibration (caused by a DC motor) near the user’s neck, forcing them to step away from others. 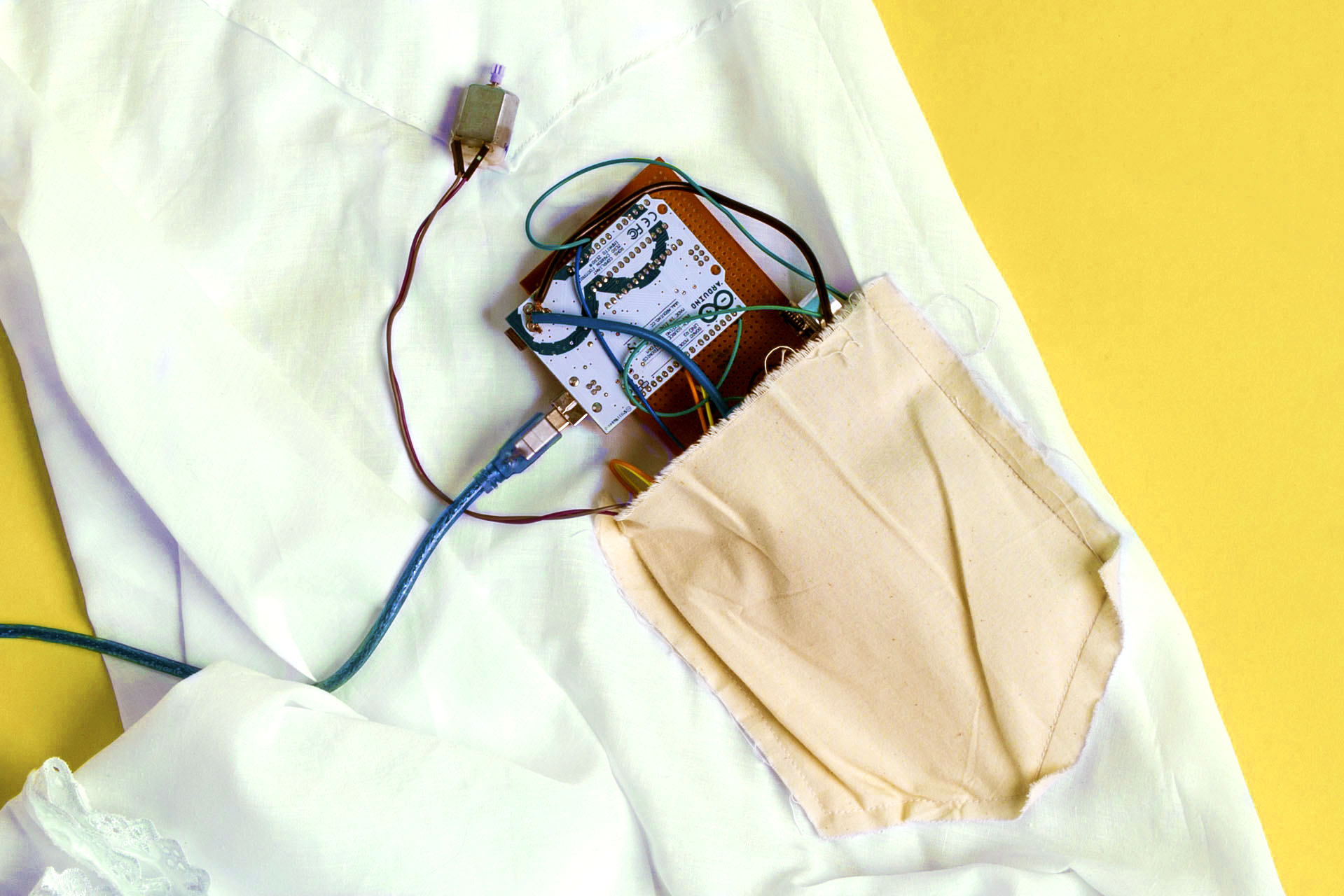 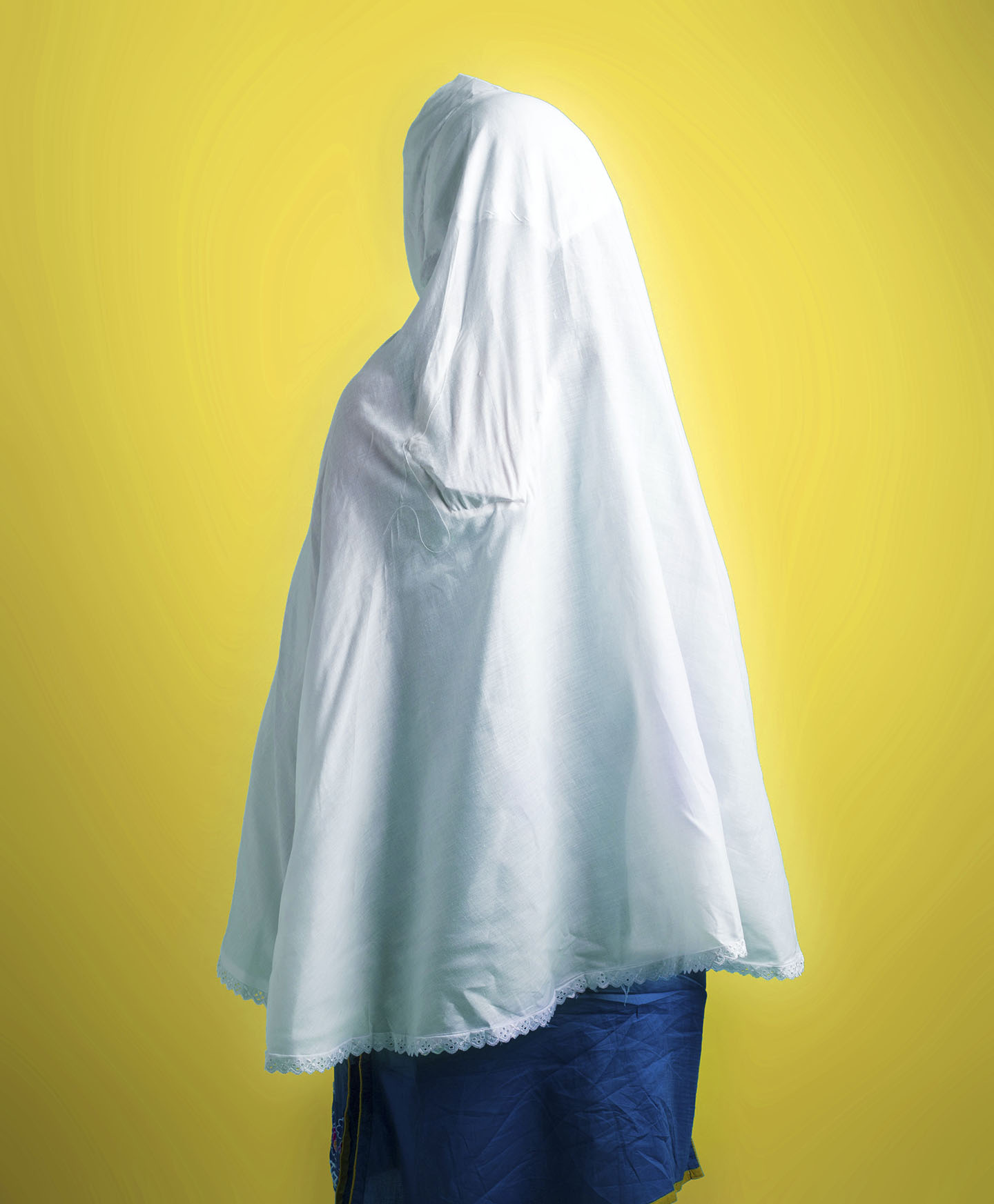 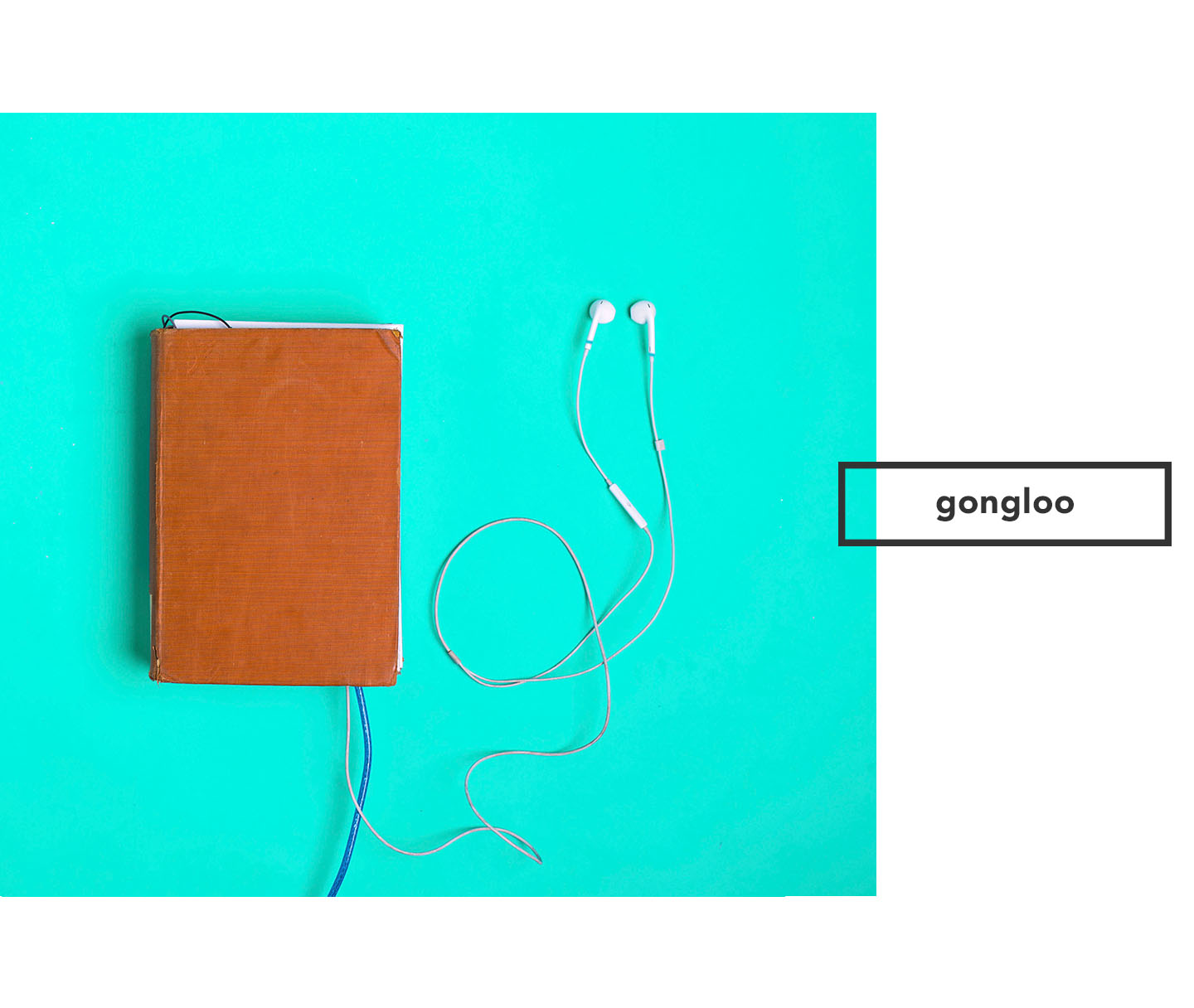 Isma remembers her doll Gongloo as symbolic of her childhood and later to her coming of age. In some ways, Isma felt that she was in denial over her growing up by insisting on playing with the doll despite realising she had outgrown her toys. An illustrated book showed this evolving bond between Isma with Gongloo over the years. Opening the book triggered a soundtrack that narrated Isma’s childhood and changing relationship with her toy. This project looks at how we perceive childhood as a stage we grow out of, but we always long for ways to relive and revisit those times.

An Arduino was used which was connected to the laptop as the power source. An SD card with sounds was used and the circuit was made including two wires acting as buttons, a breadboard, the SD card adapter, a headphone jack. As soon as the book was opened, the circuit is broken and the sound plays. The coding involved writing “if/else” instructions as queues for the sound. 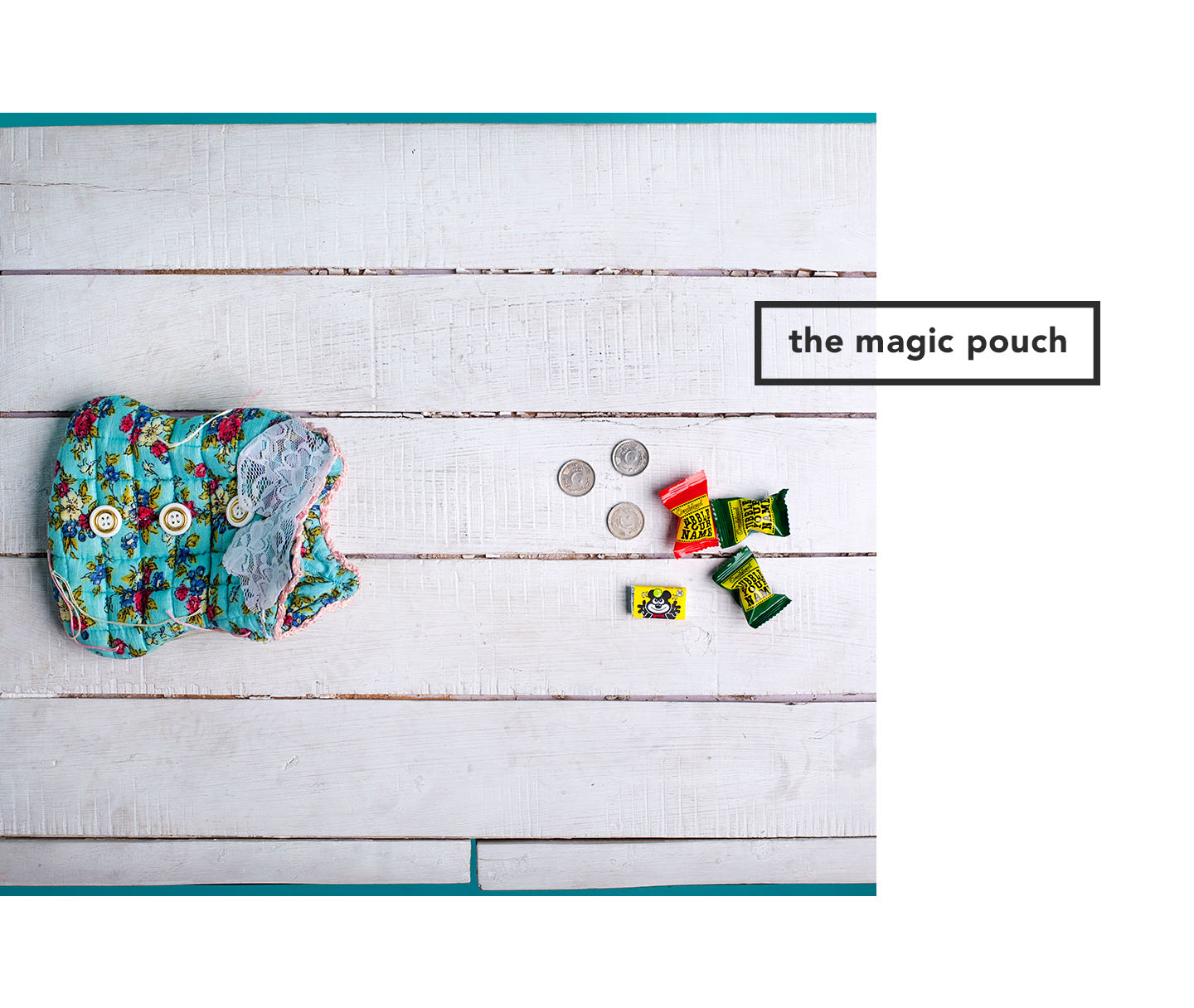 Aman’s grandmother gave her a pouch when she was very young. The pouch would be filled with coins and sweets, and Aman believed it was magical and that the pouch would replenish these goodies on its own. In reality, her grandmother would sneak them inside at night or when she wasn’t looking. The memory is reminder of how her grandmother made a joyful experience out of an ordinary object with just a little trick. This project reminds one of when we are younger and have a wild imagination and believe in infinite possibilities.

When the light is on the pouch and the objects around them seem pretty ordinary. But with the use of magnets, as soon as you turn the light off, the magntized objects begin to creep in closer to the pouch. When you turn the light on again, they stop as if nothing ever happened. A DC motor has a series of string attached to it. At the end of each string is a magnet. This mechanism is hidden under the table. On the topside of the table objects have magnets attached to their bottoms. Arduino used to control the speed of the motor as well as the signals received by the LDR (light input) to start or stop the motor. Once the objects reach inside the pouch, the timer switch enables and the motor stops spinning again. 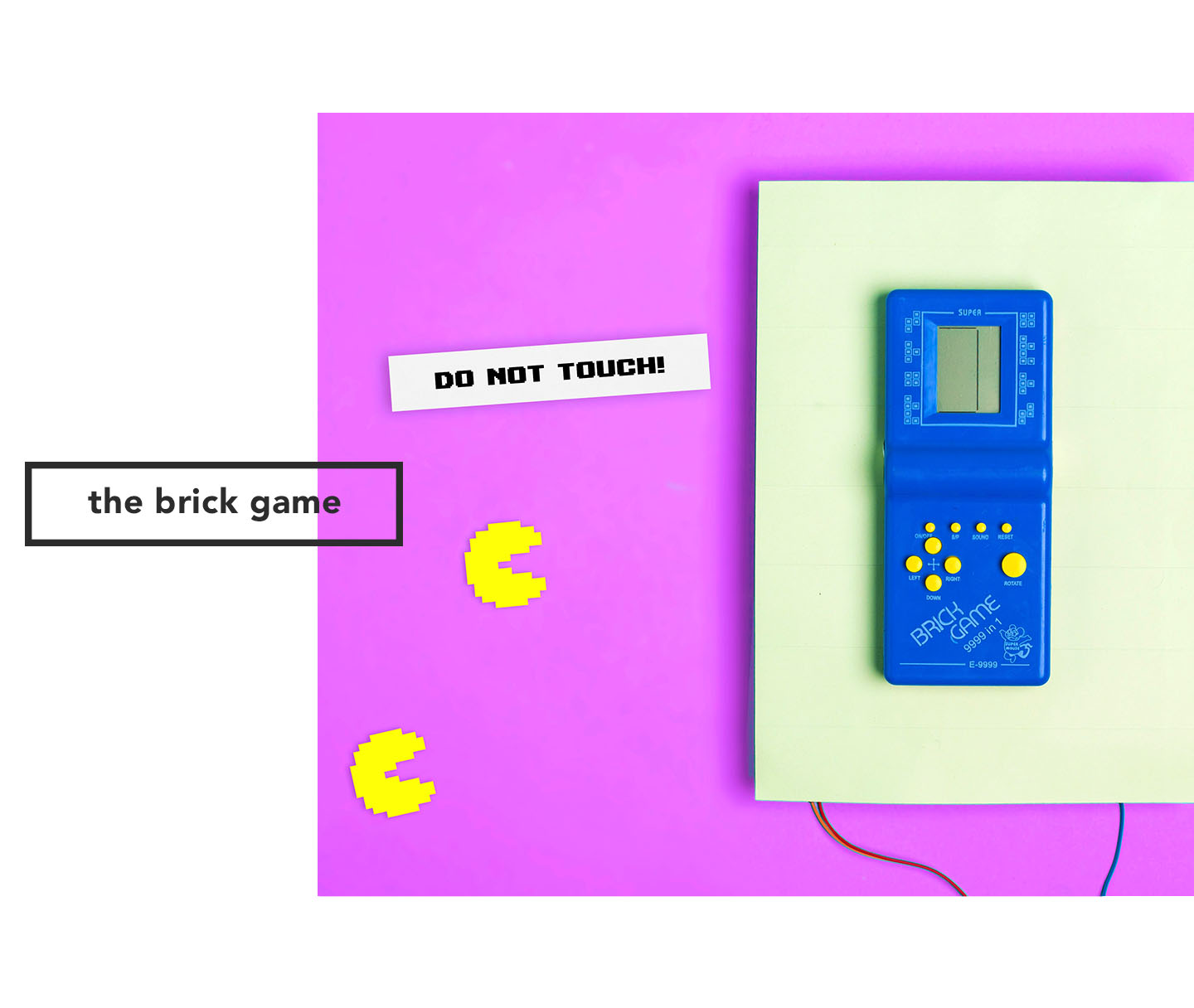 Sarmad’s fondest memories were wrapped around his precious Brick Game that he would play obsessively as a child. He would sneak into his dark store room at night to play the game after his bedtime, but would often forget to mute the game’s volume, resulting in his parents finding him and ultimately punishing him for staying up so late.

The group decided to use this memory to create a game within a game. A circuit similar to a burglar alarm was constructed using an ultrasonic sensor, a buzzer, a contact switch and LEDs along with the Arduino. The game was connected to the alarm system which would be triggered when someone would move the game from the contact switch. If the user did not return the game back to its resting position within 5 seconds, a sign reading “Too Late! You’re Caught!” would flash with LEDs. 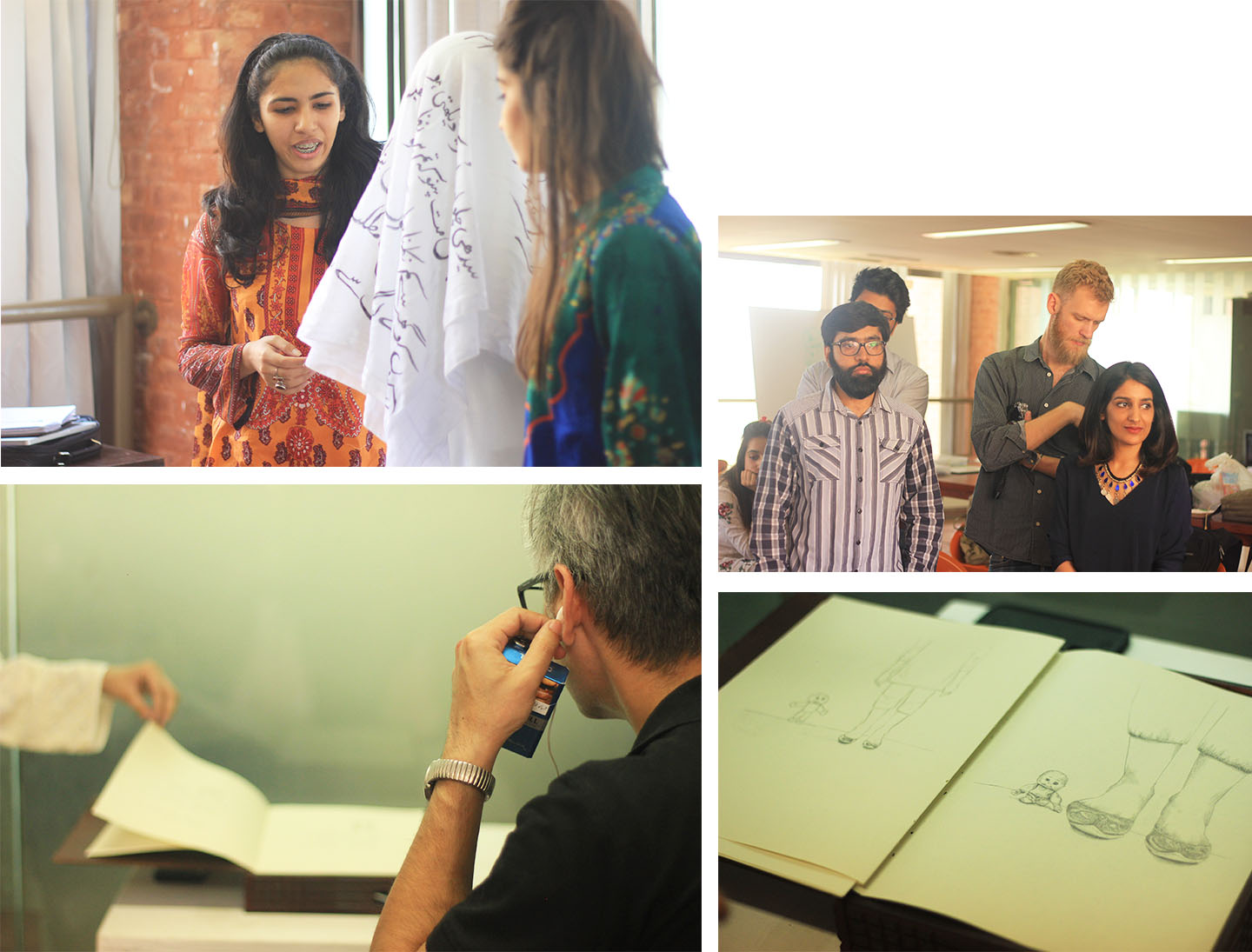 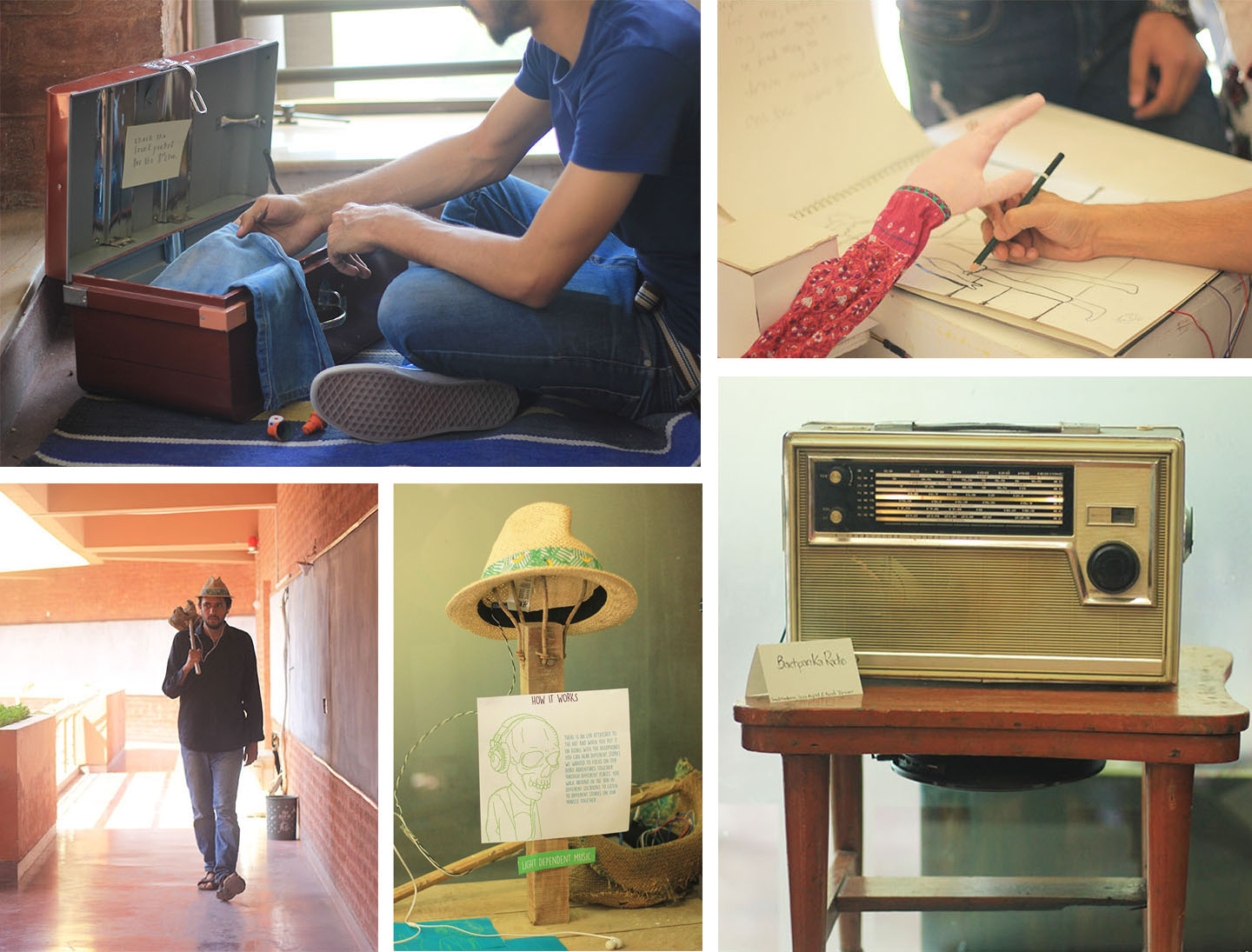 Special thanks to the students of Major Studio III who worked so hard on these projects! 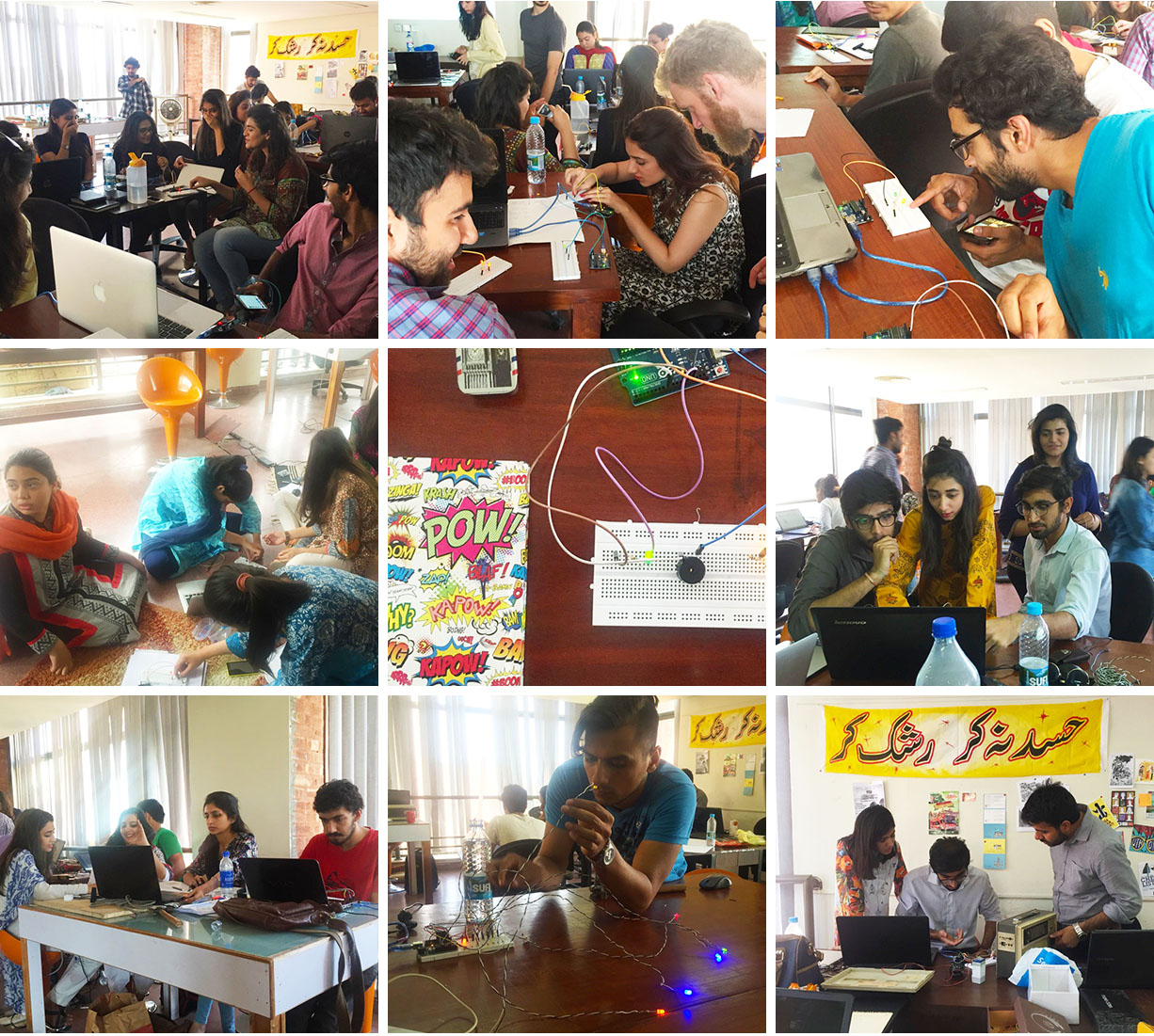 This project was a collaboration between Beaconhouse National University and Pakistan’s first maker-space, Make-i-stan.